Good Grief! Where Did August Go?

I get the sneaky feeling I've been pretty busy again lately though this is the first time I've been back to the North Shore since I was here in early July with Barb.  This time around I'm up in Salem for the weekend with a mission - to house and puppy sit for my friends Juli and Walt while they head off to Montreal to celebrate Walt's September 13th birthday a bit early. I'm kinda envious as I'd love to see Montreal one of these days but it's been there since 1605 so I guess it will still be there by the time I can finally visit it myself.  Of course, once I see Montreal then I'm going to want to see Quebec though if I ever get around to doing that, I should probably take someone who speaks French with me just in case!

I guess it's sort of cheating to say that I haven't been to the North Shore since early July as I was up this way last weekend - just not in Salem. I went to Portsmouth, New Hampshire with my cousins Amy and Robin to have lunch at Newick's Seafood Restaurant - a family favorite since 1972 when we lived up that way while my Dad was stationed at Pease Air Force Base. We followed that up with a little tax-free shopping and then drove down to Newburyport, Massachusetts to attend a concert by the Nova Scotia bluegrass band, The Spinney Brothers.  In case you're interested in reading up on either adventure, you can click here and here for the posts on The Distracted Wanderer.

My Travels With Nathaniel  for the Hawthorne Hotel have been keeping me busy also though most of that has been in the form of writing rather than traveling the past two months. I'm hoping to maybe get to a place or two with mini-Nate this weekend if the last-holiday-weekend-of-the-summer crowds aren't too bad.  The weather is supposed to be quite nice so that's a major plus and it's been too long since I've walked through a historic house so it's time to amend that.

Amanda is up here with me and visiting with some of her North Shore friends in between helping out with the pups who are pretty easy maintenance as long as they get their food and their walks and some attention now and again.  Just don't tell Tesla that we're up here with a couple of dogs, he might not like that very much! 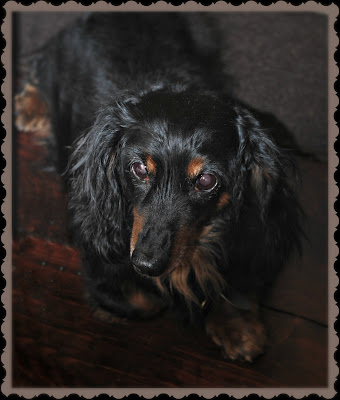 Kookie is the older lady of the house who is more interested in naps than walks and is starting to have a touch of dementia - bless her little old heart.
In other news, Jamie will be coming home from Toronto in about two weeks but chicken that I am, I haven't told Amanda that yet; I reckon I'll break the news to her this weekend at some point. I think she was hoping that her sister living in Canada was going to be a permanent thing but I always hoped Jamie would come back home at some point and figured she'd have to come home after six months at any rate or be an illegal alien. Those two are just going to have to grow up and learn how to get along - and get jobs too, that would be nice!

I hope that everyone has a great start to their September - which I still can't believe is here already.  Time most certainly does fly!
Posted by Linda at 8/31/2012