Remembering and Praying For a Norwich Police Officer 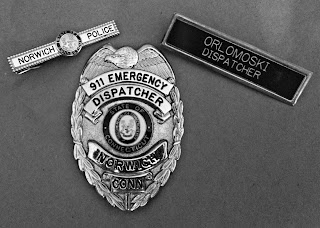 It's been over ten years since I wore those things pictured to the right but when I turned in that badge and put the tie clip and name tag away for the last time in August of 2002, I didn't put away my concern and feelings for the men and women that I once dispatched at the Norwich Police Department.  Because of that, when I caught the news clip tonight declaring that a police officer had been shot during a stand-off at a Norwich residence, my blood ran cold.

At first it seemed rather unreal, like I had somehow managed to teleport myself back to Stockton, California where I first became a dispatcher and officer involved shootings were - sadly - quite common but the world has become a different place and things like school shootings, mall shootings, and officer-involved shootings can obviously happen anywhere. There's no such thing as "it'll never happen here" anymore as unfortunately it does and does so more frequently these days.

As of this writing, a stand-off is still underway at the location where a mentally disturbed man pumped five bullets into a young man who I fondly remember from his rookie days at NPD and beyond.  Others know him as Officer Jonathan Ley but I always think of him as "The Monkey" as that became his nickname shortly after he came on duty.  He was quick, he was smart, he was a decent bowler, off-duty he wore some pretty outlandish Hawaiian shirts, and he had a great sense of humor which you have to have if you're going to be a law enforcement officer.

No doubt, Jonathan is still all of those things and more - still a member of the Coast Guard Reserve, still someone with a great sense of humor, and still a darned good cop while also taking on the role of father to a son who no doubt idolizes him and who's going to wonder why daddy hasn't come home from work this evening and why somebody would want to hurt him.

Finally, I am hoping and praying that the world somehow manages to stop the downhill slide that it's on as this is not the legacy that we want to be leaving our children and grandchildren. And it's not just about gun control, it's about people who are mentally ill getting the help that they need - help that works and doesn't just put a band-aid on a serious injury.

God be with you, Monkey, as he watches over you, heals your wounds, and brings you home to the family that loves you. I may have been gone for ten years, but I've never forgotten.
Posted by Linda at 1/07/2013