This, That, and a Couple of Other Things

First off, I am very pleased to announce that Officer Jonathan Ley was released from Yale-New Haven Hospital today and received a wonderful police escort home.  Law Enforcement truly is a band of brothers and I'm sure that the support and encouragement will go a long ways towards Jon's healing and rehabilitation.  Thank you to everyone for your prayers and best wishes sent his way!

It's an unusually mild and sunny January day here in Connecticut and as I look out the window and see the snow melting, I can't help but smile a bit.  Don't get me wrong, I don't totally dislike snow and think it looks absolutely beautiful when it first falls but after it's been around for awhile, it rather loses a lot of its beauty and just needs to go!  With a warm rain predicted for tomorrow and a weekend with temps in the high 50s on the way, most of what's left should be gone.  I suspect we'll get more at some point unless we're going to have another unusual New England winter but we'll deal with that when the time comes. In the meantime, the sunshine makes me smile!

Last weekend I took a trip up to Salem so that I could then take a trip up to Kennenbunkport in Maine with my friend Juli, Amanda, and Juli's friend Anita who was a real delight to get to know.  We were supposed to originally make the trip when Barb was up for Christmas but alas, the day that we were slated to go was windy and rainy and snowy depending on what part of New England you were in so we stayed in Salem and went to the movies instead.

This past Saturday was a beautiful sunny day so we took advantage of that and ventured north in search of hats and lunch!  There's a small shop in Kennebunkport called Dannah that Juli had discovered this past summer and they were having a 50% off EVERYTHING in the store sale so who could resist?  Amanda got a few things and I also picked up a nice hat for myself as well as a fascinator which I plan on wearing for tea at the Hawthorne Hotel should they decide to host a "Duchess Tea" for us older folks sometime in addition to the "Princess Teas" that they already do for youngsters.  I quite love the whole concept of tea and what better place to wear a fascinator?  After all, I can't quite wear it to work with my uniform!

Even with the trip up to Salem and Kennebunkport, I still managed to watch the rest of Season 2 of Downton Abbey so that I was ready and waiting with the rest of the country for Sunday night's Season 3 premiere.  As a rule I don't watch a whole lot of TV but everyone kept telling me that I would totally love DA and after watching both seasons - thanks to a lovely Christmas gift from my cousin Amy - I can say that they were right and I do! I just hope it doesn't take that long to release Mr. Bates! 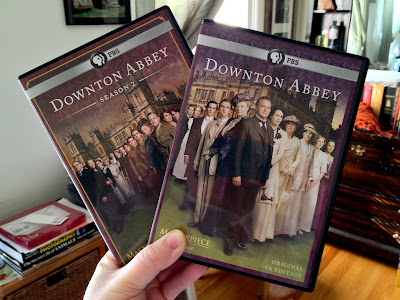 Of course now I have to wait patiently and watch each new episode when it comes on as I'd really rather not watch them online and skip ahead so far that it will seem forever before Season 4 comes out - as tempting as that may be!

Let's see, what else?  Hmm, I got my hair cut today but am less than pleased with it as I really wasn't going for the Dutch-Boy-on-the-paint-can look but that's kind of what I ended up with.  I told the gal cutting my hair that I needed it up off of my collar for uniform policy reasons but I don't think I meant THAT far up off of my collar! Thankfully it still grows fairly quickly and through the wonders of mousse perhaps I can make it look a little better but ew ... maybe it's a good thing I bought a hat in Kennebunkport along with my fascinator as I think I'm going to need it!

Ah well, speaking of work, I'm in for the evening shift today so had best think about getting some lunch and getting going.  I switched shifts with a co-worker so that I could get to my allergy shots on Thursdays as I'm supposed to have them on Mondays and Thursdays but so far the process hasn't gone very well as the shots seem to cause me some wheezing and fatigue so the doctor is having to reevaluate the regime.  With as many things as the testing indicated I was allergic to, I guess I'm not surprised - unfortunately.  Truthfully, though, I'm kind of enjoying only working one 16-hour shift a week now rather than the two that I had been doing. Once you've done 16's, 8's are a real breeze and I still have three days a week off - not a bad deal at all!