To be perfectly honest - not a whole heck of a lot! Well, except maybe that earlier the temperature gauge in my car looked like this: 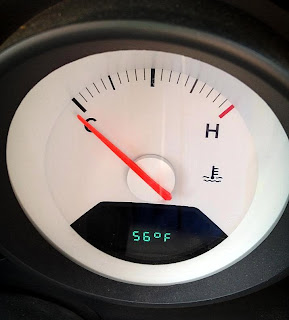 Unfortunately, the tiny bit of sun that we had to go along with it went buh-bye a bit ago and temperatures are going to steadily make their way back down to where they normally are in January.  Hiss!  Boo!  Actually, a big "Hiss! Boo!" to the local weathermen who had said that the whole weekend was going to be sunny and mild and it ended up being foggy and drizzly.  How is that no one has sued a weather forecaster yet?  Surely there must be some sneaky lawyer out there who can build a case for dashed expectations and mental anguish for when nice weather is predicted and it's a total bust!

You would think that with all of their fancy-dancy Doppler radars and such that predicting the weather would be more of an exact science these days but alas, that does not seem to be the case and the best indicator is to still look out your window or - better yet - poke your head outside! And even then, there are no guarantees as Mother Nature is surely a fickle wench if ever there was one!

With the forecast definitely falling short this past Saturday, I set out in the drizzly fog to drive my cousin Amy and her niece Caitlyn up to Lexington, Massachusetts to see a bluegrass concert that Amy thought perhaps I would like. Based on the weather forecast, we thought it might be a good day to take a walk around the Lexington Battle Green so that I could get some photos for one of the other blogs I write (Travels With Nathaniel) but alas, it was like walking around in the tule fog out in California that sends a shiver down my spine whenever I think of it!  Of course, I think tule fog tends to be thicker but I'm sure Sandee knows what I'm talking about! After our foggy stroll around the soggy Battle Green, we took a drive over to Saugus so that I could check out an enormous Chinese place that I'd driven by numerous times and never stopped at.  The Kowloon Restaurant has been a North Shore go-to place since 1950 - Barb can reminiscent about it with the best of 'em!  The food was okay though not good enough to make the drive up there for it alone - unlike the clam chowder at Newick's Seafood House in New Hampshire!  It might be worth a second try another time I'm up that way but we'll see!

After sharing a Pu Pu Platter, we made our way back to Lexington where the Gibson Brothers concert was being held at the National Heritage Museum.  The show was sold out but the venue has great seats all the way around and we found some good ones in the back of the auditorium where I could record a few songs with my iPhone and snap a few photos and not disturb anyone. Not that it makes for the best visual quality mind you but the audio is pretty good!

This song that I'm sharing was the last one that the reigning IBMA 2012 Entertainers of the Year played at the concert, a Loretta Lynn and Shawn Camp song called "Dying For Someone to Live For". It was their first time playing it on stage and I thought they did a mighty fine job with it. See? I've gone to enough concerts now that I'm starting to pick up the lingo!


All in all, in spite of the not-so-great weather it was nice day and at least I wasn't driving in a blizzard or dealing with sub-zero temperatures!  We usually get plenty of both in January so today I greeted the 56 degree reading on my car dial with a big smile and the knowledge that spring will eventually be here to stay - I just need to have some patience ... and the occasional hot beverage ... until it does!
Posted by Linda at 1/14/2013