A not-as-quick-as-it-could-be-but-semi-quick update about Hurricane Irene as that's about all I have the energy for following a night with very (and I do mean very!) little sleep and then a long day behind the dispatch console.  It's going to be an early bedtime for me and as lousy as my mattress is, it's probably going to feel like sleeping on a cloud after the slab cot I slept on in the Conference Room at work last night ... or more accurately tried to sleep on but failed miserably!

As the weather gurus were predicting hurricane force winds in the area at the time I normally would have been going to work and not really wanting to drive in those winds if I didn't have to, I voluntarily went in to work last night at about 8:30 after Amanda had gone to stay with a friend.  I joined the other folks who had decided that Tent City sounded like a better idea than driving in during a hurricane; there were five women and seven or eight men with the gals upstairs in the Conference Room and the guys downstairs in the Main Lobby.

The only pictures I got were crappy ones from the dispatch center overlooking the marina and the only reason I'm posting them at all is so that you can see how high the water rose during the height of the storm.  In the first picture look to the bottom and find the railroad tracks.  In the second picture try to do that again. 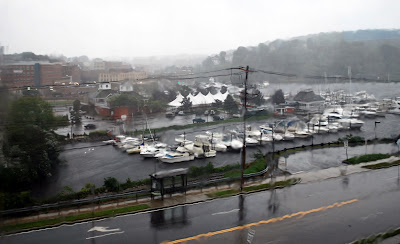 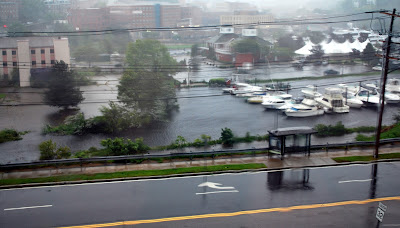 For the water to get over the top of the tracks means it's pretty darned high as those tracks sit on a pretty good embankment next to the river. I apologize for the blurriness but the window was covered with a lot of rain! The marina was quite full with boats that had come upriver to avoid the storm and I know that Sandee would love to see more of the boats and less of the water but alas, there were no good pictures to be taken in this mess!

Anyhow, we lost power twice at work but had a back-up generator and it eventually came back up and stayed.  Amanda's friend's house lost power at about 1:30 a.m. and it still hadn't come back on when I went to pick her up around 7:00 p.m. tonight.  Rumor has it that they may be without it for a week. I'm not surprised as there were trees and branches down all over the roadway when I drove out to get her. Hundreds of thousands of people in Connecticut are without power but I was very happy to get home and find out that we had only lost it here for maybe 4-1/2 hours before it was restored and Tesla was good about not opening the refrigerator door while we were gone so everything was fine!

I thank you all for your messages of concern and care on Facebook - as does Amanda.  I feel very fortunate that Irene didn't pack the punch through here that she could have and now just hope and pray that the people whom I have come to know and care about a lot in Vermont are okay.  That poor state really got slammed and there may continue to be flooding tonight.

Between the beating we took during the winter, the rains we've had most of the spring and summer and now this I think we've all just about had enough. I'm hoping Old Man Winter will take pity this year but I don't know, if he's of the same mindset as Mother Nature lately I may need to invest in snowshoes!