Who Are the People In Your Neighborhood? It was a gorgeous day yesterday so rather than spend it in the house, I decided that the Nikon and I were in need of a bit of fresh air and sunshine so we set out to take a walk around part of our neighborhood.  I had wanted to get some pictures of the local magnolia tree while it was still in bloom and before all of its pretty petals were lying all over the sidewalk. There we go - a semi-nice shot of the neighbor's tree!
From there I decided to head my feet in the direction of Yantic Cemetery which is just a short stroll in the opposite direction of the Dogwood and see how things were looking over there.  As many times as I've walked around the cemetery, I still always find gravestones that I'd not noticed before and wonder about the lives of the people who are buried beneath them.  As close as they are to my house, I've come to think of them as my very quiet neighbors. 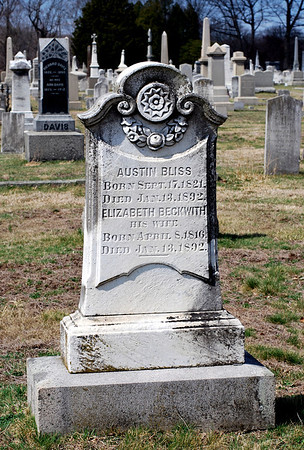 This elaborately carved stone belongs to Austin Bliss and his wife Elizabeth Beckwith who was almost 4-1/2 years Austin's senior; obviously Austin liked older women!  They both died on January 13th, 1892 though I have no idea how.  Did they die in an accident or a fire or perhaps from some illness?  I guess the one good thing about dying on the same day is that neither had to mourn the loss of the other. This stone marks the grave of Caleb B. Rogers and his three wives - Harriet S. who died in 1847, Iduella T. who passed in 1849, and Eleanora H. who actually outlived Caleb by four years and died in 1875.  I wonder how Eleanora felt about sharing the stone with the two wives that had died before her and being at the bottom of the list?  Considering she outlived all of them, I'm thinking she didn't feel too badly about it!

Looking more like a church steeple than a gravestone, this is the Morgan Family plot.  As cool of a grave markers as it is, it's not the only steeplesque onee though as there's another one right near it.
The other steeple-like stone belongs to the Williams Family but it doesn't say much more than that.  Apparently they are neighbors who like to keep to themselves! The Emmons Family obviously believed in the old adage "Good fences make good neighbors" even though I'm afraid their iron fence is starting to fall apart after all these years!
Meet the Carter Family - Sarah Elizabeth Davis who was the wife of Joseph Carter and her children, Sarah Elizabeth Carter who passed in 1901, Joseph Witter Carter who died in 1921, Josie Davis Carter who met her demise in 1935, and Hattie Louisa Carter who lived until 1944.  I'm not exactly sure where Joseph Carter himself is buried though it seems odd that he's not with the rest of the family.  One of the things I like about these stones, other than that there is an identical one for each member of the family, is that they all say "At Rest" at the very bottom of the inscription.  I think it's a lovely sentiment. Father, mother, and daughter share the Sheffield Family stone and what caught my eye here is mom's name - Adeliza Jayne.  I think that's quite the lovely name even if it is a bit old-fashioned! Not too far from the Sheffields are the Benjamins - Sidney Benjamin and I'm going to guess his wife Elizabeth who remarried after Benjamin's death as her name is listed as Elizabeth B. Benjamin Colyer.  Benjamin was a member of the Connecticut Volunteers serving in Company C, Regiment 21 during the Civil War.  Based on his date of death - May 7th, 1863 - I'm going to guess that he died during the war though I've obviously got no idea as to where and how. Another family with ties to the Civil War are the McDavid Brothers whose stone is pictured above.  James S. McDavid died on August 23rd, 1864 at the age of 17 years and 9 months while his brother George H. died on March 27th, 1871 when he was only 22 years and 5 months.  As James was the older brother by 2 years, I'm going to guess that the flag at the grave is for him and tha he died as a result of the war at a very young age. Corporal George W. Swain was a member of the Second Connecticut Infantry, Company B, and it looks like he's another neighbor who fought in the Civil War and never made it home alive again.  Again, I wish there were more information on his stone but it's standard military issue and tells no tales I'm afraid. Finally, this last stone belongs to the Jennings Family and upon closer inspection, it seems to tell a pretty sad story.

On one side of the stone is the inscription for William Jennings who was a member of the Connecticut Volunteers, Company K, 12th Regiment. He was taken prisoner at the Battle of Cedar Creek in Virginia on October 19th, 1864 and on November 9th of that same year, he died as a Prisoner of War at Salesbury Prison in North Carolina.  He was 39 years old. Depending on when William marched off to battle he either left no wife waiting at home and worrying about him or she passed on shortly after he left as his bride, Annie Coleman, died herself on December 16th, 1862 at the age of 33. And just to make this marker even sadder, on the opposite side of his father's is the inscription for John Arhur Jennings who died on July 15th, 1857 at the age of 2 years and 28 days. They say that there is no greater loss than that of a child but when William Jennings answered the call to duty and fought with the Connecticut Volunteers, he was a man who had already lost his son and his wife both.  I wonder if there was anyone to write him letters from home telling him that they missed him and wished him a safe return or if he was a man alone in the world?  Did he join the war because he was a man with a broken heart or did he learn of Annie's passing in some distant camp far from his beloved?  No doubt as he lay dying at the Confederate Prison in North Carolina, his thoughts were that he would be joining Annie and John Arthur soon and I'm sure that brought him a certain measure of comfort and peace. Or at least that's the story that I'm telling myself as to believe anything else would just really be too sad.

So those are just a few of my quiet neighbors who reside - nay repose - down the road from me.  As you can tell, I have a soft spot in my heart for those who served and fought during America's Civil War and I only wish that I knew more of their stories as even though what simply remains now are inscribed pieces of stone, at one time those whose names are etched upon them were living and breathing people that had families and friends and neighbors of their own.