Throwing a Little Light on the Subject Before continuing on with my posts from our Maine vacation - which will contain more lighthouses than just the three that I wrote about yesterday - I thought it might be a good idea to take a few moments to educate and en"lighten" folks a little bit about the most important part of a lighthouse - the light!  Or at least historic Fresnel lights - not so much the more modern light in the picture above!

As I was doing my research on the various lighthouses, it dawned on me that I had pretty much no idea what a "Fourth-order Fresnel lens" was other than it seemed like a lot of lighthouses had them!  I figured if I didn't know what they were, then probably a lot of other people didn't know what they were either so off I went in search of an explanation.  Upon finding it, you could say that "the light dawned" and a big old light bulb lit up over my head as suddenly it made perfect sense.  Allow me to explain ...

Way back around 1818 or so, a French physicist by the name of Augustin-Jean Fresnel (which is actually pronounced "Fra-Nell" so I even had that part wrong) was experimenting with different types of optics as he studied the behavior of light both theoretically and experimentally. As the French commissioner of lighthouses, he was the first to construct a special type of lens to be used as a substitute for mirrors in lighthouses - a light that could be seen much further than that which lanterns and reflectors could produce. 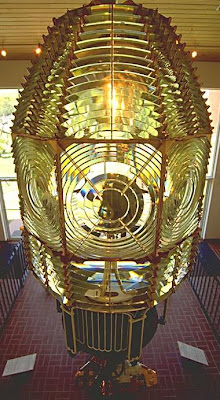 Tests showed that while an open flame lost nearly 97% of its light, and a flame with reflectors behind it still lost 83% of its light, the lens that Fresnel designed was able to capture all but 17% of its light.  Because of this amazing efficiency, the lens could easily throw its light 20 or more miles to the horizon which made it perfect for lighthouses whose light needed to be seen far from shore in order for ships to properly navigate.

Built as a multi-part lens rather than as one continuous piece, the lens that Fresnel invented and bears his name, is much thinner, larger, and flatter and captures more oblique light from a light source which allows that light to be visible over a much greater distance. The early lenses looked rather like a beehive with a light at the center and concentric rings of glass prisms above and below that would bend the light into a narrow beam. Later designs, like this First-order Fresnel lens that was once used at the Ponce De Leon Inlet Lighthouse near Daytona Beach Florida, added a "bull's eye" that was shaped like a magnifying glass in the center of the lens which made the concentrated beam even more powerful than before. The "bull's-eyes" would bend the light into a round beam that would create a flashing effect.

Originally pretty much all Fresnel lenses were built using the same design but the problem arose in that ship's captains couldn't tell one light from the next at night and had no idea where they were. To aid in navigation, lenses began to be made with their own distinguishing "characteristics" such as bull's-eyes or flash panels which made use of a flash of light followed by a period of darkness or by using colored light. Once oil lanterns were converted to electricity, it became even easier to give each lighthouse its own flash pattern and distinctive characteristic which then made it easier for captains to look at their charts and then at the flash pattern or color of a light and tell whether he was off the coast of Rhode Island or had somehow ended up in Maine! A good example of a First-order Fresnel lens that used color to distinguish it from others was the green light used from 1929 to 1990 that signaled sea traffic coming from the Atlantic Ocean into the waters of Block Island and Long Island Sound at Southeast Light on Block Island, Rhode Island.  Built in 1874, the 52-foot tall tower originally contained a white light (on display in the museum) until 1929 when it was replaced with a green light with a range of 22 miles. The light was 12-feet high by 6-feet wide and stayed in service until 1990 when it was replaced by the United States Coast Guard due to environmental concerns stemming from its use of mercury. The current light, which uses a green electric aircraft beacon for illumination to provide the light's distinctive color, is a First-order Fresnel lens that was originally used in Cape Lookout Light in North Carolina and replaced the green light in August of 1994.

Now as for that whole "order" of a Fresnel lens, Fresnel lenses are divided into 7 classes or "orders" which are determined by the distance of the flame to the lens - i.e, the optical power and size of the lens. A First-order lens is the largest and made of up of hundreds of glass prisms and the lenses then decrease in size from there through Second-order, Third-order, etc. The first three largest orders were built for use as seacoast lights while orders Four through Six were smaller and used for harbor or bay lights. There is also a 3.5-order lens which was used mostly in the Great Lakes.

It's kind of hard to see in this picture but a lot of lights along the Maine coast use a Fourth-order Fresnel lens, like the one at Owls Head Light - Perhaps this little picture here gives you a better idea of what one actually looks like.  A Fourth-order lens was commonly used in major harbor lights and was also frequently used on rivers and in harbors to mark shoals and islands. Not quite 28-1/2" tall, the lens weighs between 440 to 660 pounds and can throw a light up to about 15 nautical miles. It consumed 5.25 ounces of oil per hour and in 1922 was in use in 350 lighthouses in the United States.

Anyway, that's probably enough science and what-not for this post and should probably give you more than enough knowledge of what on earth I'm talking about when I tell you what kind of lens a lighthouse is equipped with.  What I find really amazing is that with the vast majority of lighthouses, their original Fresnel lenses are still in use today - something that stands as a true testament of how well these lights which are probably responsible for saving countless lives were designed and built.  Their light sources have changed from oil or kerosene to electricity or solar but the glass lenses remain the same all these years later.  I've got to think that Augustin-Jean Fresnel is looking down from heaven and smiling ... or perhaps beaming would be a better word!
Posted by Linda at 11/15/2010