Even If You Know Nothing More About Opera Than I Do, You'll Really Enjoy This Book!

What I know about opera has been primarily restricted to an old Rice Krispies commercial from the late 1960's featuring a famous tenor aria from Ruggero Leoncavallo's 1892 opera Pagliacci:

Widely regarded as cartoonist Chuck Jones’ greatest masterpiece and topping many Top Ten lists of the Greatest Animated Cartoons of All Time, the six-minute short features Elmer Fudd taking on the role of the demigod Siegfried (the central character in the Völsunga saga) while Bugs performs the role of the beautiful Brünnhilde (a shieldmaiden and a valkyrie in Norse mythology) - though beautiful may be up for debate in this case!  Yep, leave it to Saturday mornings to give us kids a little bit of culture back in the day!

The only other thing I really knew about opera was that my long-haired James Taylor/Carol King-loving Uncle Bill - who back in the early 1970's told me to keep an ear open for some guy named Elton John who was "going to make it BIG" - also enjoyed going to the opera when he lived in San Diego.  Huh?  Seriously?  Well, if Uncle Bill liked it then opera had to have something good going for it as Uncle Bill was the cool uncle in the family!

Even with knowing nothing more than that about opera, right now I've got to say that what opera has going good for it is a new book that I recently had the pleasure of reading that was written by a lovely lady whom I met through blogging several years ago, Gale Martin.  DON JUAN IN HANKEY, PA is Gale's recently published novel which I was fortunate enough to win a signed copy of through a contest give-away that Gale was having on Facebook. Had I not won the book I certainly would have bought it as the reviews have been fantastic and I knew that if Gale wrote her novel at all in the style that she used to write her blog then I was going to quite enjoy it as Gale's got that snarky sense of humor that I so love in a writer. 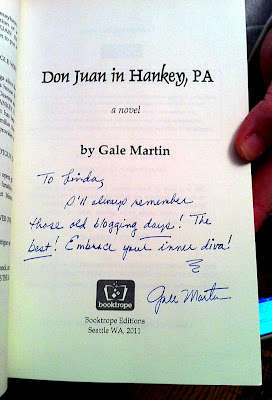 I received my signed copy of Gale's book in the mail early in the week and thanks to Amanda accidentally giving my laptop charging cable to a friend when she mistakenly thought it was hers, I had the opportunity to sit down and do some reading whilst my computer was dead as a doorknob (to quote one of Gale's characters who somehow manages to butcher sayings even more than myself!)

It says on Gale's website, for readers of the book "Prior knowledge about opera is optional. Love of laughter, absolutely essential." which worked for me as I love books that make me laugh while the only thing I knew about Mozart, the composer who wrote Don Giovanni based on the Don Juan that appears in Gale's book title, is pretty much limited to the 1984 film Amadeus - the fictional story of Wolfgang Amadeus Mozart (played by Tom Hulce) who tells the King that "I am a vulgar man but I assure you, my music is not."

The movie is told in flashback mode by Antonio Salieri (F. Murray Abraham), a Venetian classical composer, conductor and teacher and it probably would have been a good chance for me to expand my limited knowledge of of opera except for one thing .. Even though the movie won eight Oscars out of the eleven that it was nominated for, I couldn't stand Mozart's laugh so a lot of the opera featured in the movie zipped right past me while I anxiously waited for the movie to end so I could get the heck out of the theater.  If the opera Don Giovanni was at all featured in the film, you couldn't prove it by me!

However, even with my limited operatic knowledge and aversion to Mozart's laugh, I had certainly heard of Don Juan who is probably the most famous fictional rake of all time; a rogue and a libertine who takes great pleasure in seducing women (preferably virgins) and then fighting their men. The Don Juan legend was thought to have first been written about circa 1630 in the play El burlador de Sevilla y convidado de piedra (The Trickster of Seville and the Stone Guest) by Tirso de Molina. However, no matter how many other people wrote about Don Juan, the most influential version of the legend was Mozart's two-act opera Don Giovanni (Don Juan in Italian), first performed in Prague in 1787. The opera contained an Italian libretto (the text used in an extended musical work like an opera) by Lorenzo Da Ponte which was billed as dramma giocoso, a term that denotes a mixing of serious and comic action.

Just as Mozart's Don Giovanni blended comedy, melodrama and supernatural elements into the story of the most famous womanizer of all time, so does Gale's DON JUAN IN HANKEY, PA - the story of a slightly dysfunctional small-town opera guild and their attempts to produce a version of Mozart's famous opera in the hopes of saving the Hankey Opera Company from financial ruin.  From the first pages of the book straight through to the last, Gale writes a story filled with comic twists and turns, intrigue and mystery, longing and lust, and characters that make you think "Hey, I know someone just like that!"  I honestly found myself really laughing out loud while reading the book as well as quite unable to put it down until I finished reading it at 2:00 in the morning. 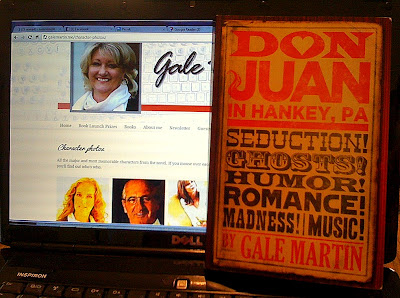 Now maybe I don't know much about opera or Mozart but I'm pretty sure I know a good book when I read one and DON JUAN IN HANKEY, PA is definitely a good book!  Of course, you don't have to take my word for it, you can check out the reviews on Amazon.com or the reviews at Gale's opera-based blog Operatoonity or visit Gale's website and learn more about the book there.

Actually, if you visit Gale's website now or check out her video, you can get a peek at the fantastic prizes that she's offering during the novel's upcoming Online Launch Week starting on November 28th.  There's some really good stuff there including two tickets to a 2012 Glimmerglass Festival Production in Cooperstown, NY along with two tickets to Verdi's Oberto presented by the Academy of Vocal Arts in Philadelphia as well as signed copies of DON JUAN IN HANKEY, PA which I think is the best prize of all!

Thank you, Gale, for being a padrona magnifica with the written word; DON JUAN IN HANKEY, PA was truly a wonderful read filled with fun characters that literally jumped off the page. I'd like to also offer an additional personal thank you for not harming any ambulance personnel with large Bobbin' Robins falling from the sky! Molto buon, lo amavo!