A Quick Recap of My Latest Trip to Salem

Can I just say that my work schedule rocks? How many people can say they get four days off every week - provided there's no overtime available - so that they can traipse around the countryside exploring new places or revisiting old favorites? Well, I don't know how many others can say that but I can tell you that this kid can and I take advantage of that fact every chance I get - including this past week when I was invited back up to Salem, Massachusetts to work on a project for the Hawthorne Hotel.  For those of you who are thinking that I was just up there at Halloween and numerous times before that "how much is there really to see and do?" let me just say LOTS!  Allow me to share: ... and for a lot of people, the picture above may be exactly what they conjure up at the thought of Salem, Massachusetts - eerie cemeteries with centuries old gravestones.

But Salem is also a coastal town and there are things to see and do down by the water, too.

Amanda and I walked around downtown and stopped in at a consignment shop with lots of neat old things.  Good thing I don't own a pick-up truck!

Even though fall was obviously waning and a lot of the leaves had fallen from the trees ... 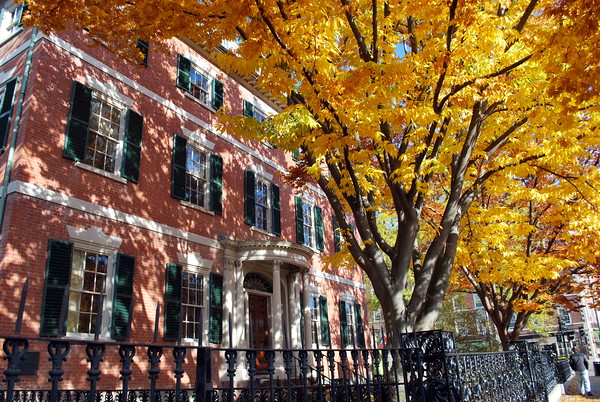 ... there was plenty of beautiful autumn color to still be found! 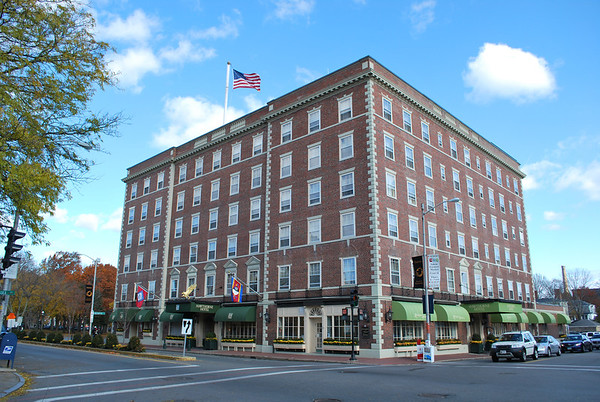 This picture that I took from the corner of Essex Street and Hawthorne Boulevard of the Hawthorne Hotel almost looks like a postcard, doesn't it?

This is Room #418 which was our ginourmous and beautiful room for the two nights that we were there.

It was week one of Salem's Restaurant Week so I treated myself to dinner at Nathaniel's after Amanda took the commuter rail down to Boston to visit with friends.

The first course of my three-course meal was a bowl of Steven's Seafood Chowder and it was so delicious I was tempted to embarrass myself by picking up the bowl and licking it to make sure I got every drop! The next night I went out to dinner with Juli and Walt but the meal wasn't nearly as good as the one at Nathaniel's.  That said, the company was fabulous!  Later that evening, after I had been editing pictures for a few hours, I went down to the warmth of the Tavern to treat myself to a drink. My Vanilla Creamsicle martini was delicious and went perfectly with the Pumpkin Cheesecake that was calling my name from the kitchen.  Yes, I probably ate WAY too much on this trip but it's not like I eat like that every day - which is probably a good thing!

The next day I took more pictures of different parts of Salem including this beautiful house on Chestnut Street.  I don't suppose there's any chance the guy that owns the place is single and looking for a wife??  Oh to live in a house like that!

On Friday Amanda and I went to the Peabody Essex Museum to see a new exhibition that would officially open on November 12th but we were lucky enough to get in to see it before then.

No matter how you look at it - the PEM is beautiful ...

... and their newest exhibition - "Unbound, Highlights from the Phillips Library at PEM" - is fascinating and fantastic!  I am so glad that Amanda and I had the chance to see it and you can see part of it too if you visit my post at The Distracted Wanderer - Rare Objects Become "Unbound" at Salem's Peabody Essex Museum.
No matter how many times I go up to Salem, there is always something new and different to see and do so there's never any danger of me being bored or running out of things to occupy my time!  As a matter of fact, I'm plotting my next trip up already as Salem is quite beautiful at Christmastime and there just might be something good to take a picture of!
Posted by Linda at 11/12/2011