A Monday Mish-Mash of Catch-Up

Seems to me it's been awhile since I've written a "regular" post over here so I thought I'd take some time to update the goings-on in my life lately rather than do my darnedest to lead you over to The Distracted Wanderer and whatever my newest post is over there. Lately blog posts here seem more like a jumping-off point over to that blog - something I do in order to get more traffic at the TDW in the hopes that someone will eventually take me seriously as a travel blogger. As long as this blog has been around, it definitely gets more traffic than the TDW but I'm hoping that will eventually change as Google picks up more searches and leads more people over that way. In the meantime though there really is more going on in my life than trips to a Battle Monument in Bennington, a Grand Resort Hotel in New Hampshire, the most fantastic Halloween Ball in the country, or even a historic Comfort Station in Massachusetts - the latest post on my wanderings if you'd like to check it out!

For example, Jamie will finally be coming home from Canada the weekend after Thanksgiving and probably none too soon with the way the weather has been acting this year;  I'm afraid if she waited much longer than that she'd have to return via sled dog or something!     When she went up to Manitoba in July she didn't exactly pack winter-type clothing as I really wasn't expecting her to be up there visiting her friend for quite as long as she has been and I suspect that Winnipeg is getting a bit chilly.  I guess that she figured trips to Canada are going to be few and far between so she wanted to stay for as much time as she could but that said, I believe she's quite ready to come home and try to find some sort of job as she tries to figure out which life path she wants to be on. Granted, finding a job around here is pretty darned tough but she said that she's willing to pretty much take any job that she can find even if it requires asking if you want fries with that!

In preparation for her coming home and still having Amanda here being that she wasn't able to go back to college this year as I've yet to win the lottery or have any wealthy distant relative leave me a substantial sum of cash in their will, I needed to take some steps for some better sleeping arrangements. Amanda has spent the summer sleeping on a trundle bed in the dining room while the perfectly good bedroom that I spent a long time painting when we first moved to this house has been used mostly as a storage catch-all for both she and her sister's stuff.  I suggested bunk beds awhile ago and was immediately scoffed at by Amanda but then after she thought about it some she decided that might not be a bad idea as she could then get a big table and use the space that the trundle bed was taking up as a craft corner.

After receiving her blessing I started looking around for a sturdy set of bunk beds and was able to find some on Craig's List that came complete with mattresses for what I thought was a very good price.  A few email correspondences back and forth later and I had made arrangements to have my go-to guy Andrew pick them up for me on Saturday.  The guy who was selling them actually lived closer to Andrew than I so that worked out pretty well.  Shortly after he arrived late Saturday afternoon, Andrew had the beds all assembled (thank you Andrew - I would be lost without you!) and that night Amanda tried hers out for the first time and declared it to be quite comfortable. 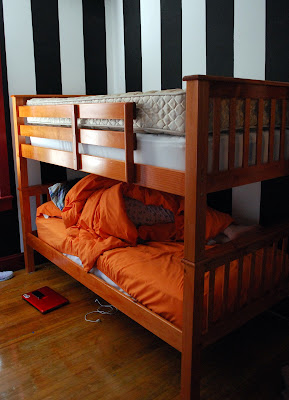 I snuck in this morning and took a picture of her sleeping quite soundly but don't tell her I posted it here as she'll probably give me that look! Surprisingly Tesla isn't in the picture as he usually sleeps next to Amanda's feet but I think he ran as soon as he saw I had the camera! (Memo to self: get the kid a nightstand so that her MacBook isn't on the floor all the time!) When Jamie gets home she'll get the top bunk minus the extra mattress and hopefully the girls will learn how to co-exist together without every day being a version of Family Feud: The Home Version! If not, I'm moving the bunk beds to the garage and they can sleep there! 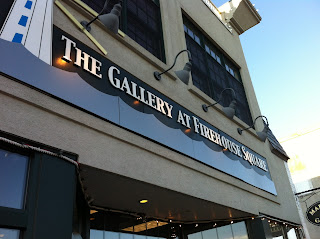 In addition to acquiring the bunk beds, this last batch of days off also had me attending the opening reception of the Holiday Photography Exhibit at the Gallery at Firehouse Square in New London where I have eight photos on display alongside those of 15 other photographers.

My friend Paula, who is an art teacher, had encouraged me to submit some of my photos for the show and I was quite surprised when eight of the ten I sent in were accepted.  Of course that then meant I had to get them all framed and matted and prettied up to hang on the walls of the cute little gallery on Bank Street in New London but I managed to do that without suffering from too much stress though there definitely was some involved!

Friday night was the official opening of the exhibit which continues on until December 24th and I was thrilled to have had the support of some of my friends who showed up that evening.  Amanda and Paula were there along with John and Christine, Jeff and Sarah, Bucky, and Melissa, and Stacey and Jason.  Stacey, a fellow blogger and real-live published author, actually wrote a post about the evening on her blog that if you'd like a chuckle, you can read at Hobnobbing With the Artistes.

Believe it or not, I didn't bring my Nikon along for the evening so I had Amanda snap a few pictures of the gallery with her fancy-dancy new iPhone 4 that she recently upgraded to.  It takes much better pictures than my older generation iPhone 3 does though I did snap one picture of the area where most of my photos were displayed. That hand photo-bombing the shot would belong to Amanda of course! 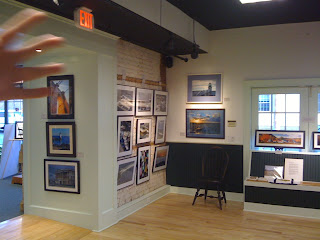 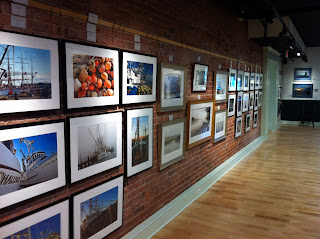 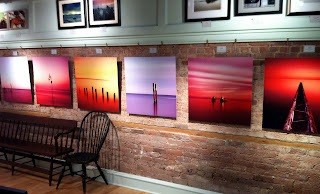 All of the photographs on display in the exhibit are for sale so if you live in the area and are totally stumped on a last-minute gift for that certain someone at Christmas, feel free to stop in at the Gallery at Firehouse Square and take a look around.  Who knows?  Maybe you'll see a photograph of something you'll like!

In between work and the photography exhibit and the household stuff and what-not I also managed to come down with a nasty case of bronchitis that I seem to be having some trouble kicking. I went to see my doctor following a rather scary bout of "I can't seem to catch my breath" one night and she put me on antibiotics and an inhaler but even after finishing the antibiotics I've still got a pretty bad cough that keeps me awake a good part of the night sometimes. I was hoping to be able to quit taking my inhaler which leaves a nasty metallic taste in my mouth and causes trouble sleeping but alas, I don't think I'm at the point where I can do that yet so I'm still puffing away on it. Hopefully this will clear up soon as except for when I can't do it, I never think about breathing and lately I've thought way too much about it!

I believe that about catches me up for now, I promised myself that I would get outside with a rake before work today and take care of some of the leaves in my yard so I need to get to that. Before I do, though, may I just say that we got rather cheated out of our usual beautiful fall as Mother Nature decided to be more nasty than nice this year. The poor leaves basically turned brown and dropped from the trees rather than put on their usual brilliant show and now it's time to bag them up and send them to the Transfer Station. It's pretty sad task as I remember the words that my friend Rhonda said at one of our recent lunches, "We only get so many autumns and it's a shame to waste even one." So true, so true.
Posted by Linda at 11/07/2011