"Early to bed and early to rise, makes a man healthy wealthy and wise"* 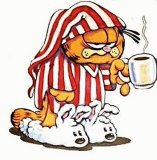 When Amanda came back to live with me last October I made the ultimate sacrifice that I, as a mother, could make - I changed over to day shift hours at work.

Now ... this may not seem like much of a sacrifice to those of you who have spent your entire lives either working day shift hours or were/are in pursuit of them but let me tell you that as someone who has almost exclusively worked evening shift hours for the entirety of my life - it is a MAJOR sacrifice!

I can uneqivocally state that I am not now - nor have I ever been - a morning person. To me there is no better place to be on a cold winter morning than snuggled under a warm comforter with the mattress pad heater set to a comfy "5" on the dial. Ah - bliss!

Pre-Amanda, I didn't have to be jarred out of my peaceful slumber by the nagging sound of an alarm clock but could awaken leisurely at my own pace, meander downstairs for a hot cup of coffee, and then curl up on the couch to catch the babbling idiocy of Regis and Kelly or the down-home twangy wisdom of Dr. Phil.

I had plenty of time before going in to work at 3:00 - I could clean the house, do laundry, meet a friend for breakfast or lunch, do grocery shopping - any number of things that might have come up. Or I could just sit around the house in my pajamas and read a book or watch TV until it was time to get ready to go to work. It was a much more laid-back, relaxed pace and I swear that my stress levels were much lower.

Alas, all of that went the way of the horse and buggy when Amanda came back to live with me because it just wasn't fair to her that I worked the evening shift. With her in school during the day that didn't give us any time at all together except on whatever my days off might be and for some reason, she found that to be unacceptable. Lord knows why but she seems to actually like to spend time with me. I thought teenagers were supposed to hate having their parents around?!?

When shift bids came out last November I was high enough in seniority that I was able to go from my beloved evening shift spot to days so I did what all good and loving parents would do - I bit the proverbial bullet and made the switch. However I just can't seem to get used to it even all these months later! I don't believe that there is a single morning when I have to get up that I don't lie there and calculate how many more days before I can sleep in. And I'm not saying lay in bed until noon but to sleep until even 8:00 would be nice! With winter fast approaching again, I know that it's going to be even worse as trying to get out of bed when it's still dark out and cold to boot is really a chore on my part. How do sanitation engineers, bus drivers, and fishermen (to name a few) do it?!?

Even though getting out of bed in the morning is probably the worst part of working days other issues ensue in that nothing gets done around the house, I no longer have time to spend with Matt & Al and the other folks on the Today show (I like Meredith Viera but I think they should have picked Ann Curry to replace Katie Couric!), and I feel constantly fatigued. Add on the fact that I am neither wealthier or wiser and I gotta think the above proverb is full of nonsense! I've neither health, wealth, nor wisdom to brag about and I'm doing both the early to bed and early to rise parts!

I spoke to my doctor about the problem last time I was in his office and he told me that some people never adjust to working different hours. People who normally work days can't deal with evenings, the night owls who love the midnight shift can't handle anything else, and people like myself who just can't seem to get kick-started in the morning will probably never get used to working anything other than evening hours.

Great! ... Not what I wanted to hear as I was rather hoping that sooner or later I might get used to this but it seems that the next four years are going to be a constant exercise in extracting myself from bed when I don't want to get up. Good thing I love that daughter of mine!

Hmmm ... I wonder if I could get one of those beds that George Jetson had that folded in half and popped him out like a piece of toast? That might actually get me going in the mornings! Then again ... probably not!

* From Poor Richard's Almanack for the Year 1735, October edition