New London On a Nice Day

Callooh! Callay! It was a beautiful day!  And I got to get out and enjoy it a little bit.

Sunny blue skies and temps in the low 40's - just what the doctor would order to lift one's spirits and make the winter more bearable. I posted on my Facebook page that I was going to go out and enjoy some sun and my cheeky friend Claire from across the pond insisted that I needed "Pictures or it didn't happen!"  Sheesh ... force me to take the camera out - the nerve!

So where to take the Nikon to prove that I was out enjoying my day rather than sitting at home and waiting for the next storm to hit?  I know, down to the Thames River in New London where I could take pictures of birds in flight with the Gold Star Bridge in the background - Or a fishing boat docked to unload it's latest catch - And let's not forget one of my favorite photography targets - trains!  I managed to get these two pictures of Amtrak Acelas without having to wait for hours unlike my pursuit of the elusive New England Central Railway train! After some coaxing Amanda decided to join me outside and sat in the car with her sketchbook while I snapped pictures.  Part of the deal, though, was that I had to take her to see the new Sherlock Holmes movie starring Robert Downey, Jr. and Jude Law.  I had offered to drop her off at the movies while I was out taking pictures but unlike a lot of other teenagers I guess she would rather go to the movies with her mother than alone (I will take that as a compliment whether she meant it that way or not!).

I must say that it's most definitely a different take on the Sherlock Holmes characters that I'm used to but that's perfectly fine by me!  As it turned out, I rather enjoyed sitting in a darkened theater for two hours watching these two guys - 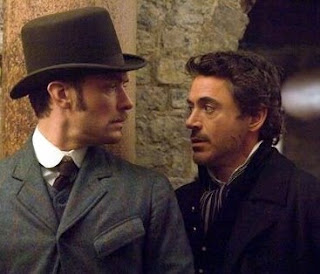 Hope everyone had a lovely Saturday and that your Sunday is great, too.  It's off to work for me but that's okay as it's Chick Flick Sunday where this week we've got Slumdog Millionaire, The Secret Life of Bees and L.A. Without a Map - which stars David Tennant.  Sounds like a good shift to me!
Posted by Linda at 1/17/2010