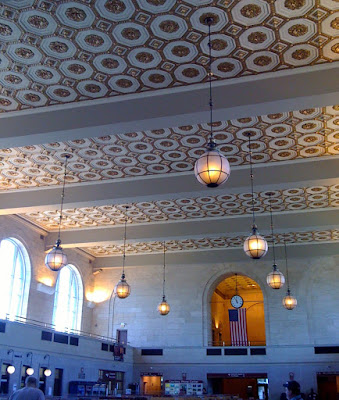 I have come to the conclusion that I take way too many pictures as for the past two days I have spent hours going through only about half of the ones that I took in Baltimore and am still not done organizing them into the post that I want to write - and that's only one post about one area.  No wonder I'll never be a travel writer - I probably wouldn't be able to make the deadline!  And you want to know what the worst part is?  I want to go back down and take more pictures as there were places I missed pictures of!  Good Lord, I'm a picture addict!

Speaking of pictures, the one above is of Union Station in New Haven that I took with my iPhone a few weeks back when Amanda's friend Sami came up to visit. They just don't make train stations like they used to, do they?

Matter of fact, they don't make buildings at all like they used to!  One of the things I really loved about Baltimore was all of the different types of architecture there and the distinct personalities of all the buildings.  Eventually I'll get around to showing you pictures of some of those buildings once I get things organized.

Speaking of not being organized, I don't think it has sunk into Amanda's head yet that she'll be leaving for college in a few weeks as I have yet to see her do anything towards getting her stuff together.  I'm not sure if she's in denial or procrastinating but it's really putting me on edge and I've been a terrible grouch the past couple of days.  Oscar in his garbage can has nothing on me!

Speaking of being a grouch, while we were in Delaware we stopped in at Best Buy to pick up a camera for Amanda to take to Otakon with her as she had forgotten the other camera here at home.  It was nothing fancy but we figured it would do the job and the salesclerk at Best Buy said that if we decided we didn't like it, we could bring it back within 14 days. That sounded fair enough so Amanda tried it out in the hotel and decided that no, she didn't like it and she'd just use the phone on her iPhone instead.  No problem, we'll just return the camera back in Connecticut.

Well, yesterday I took the camera back to Best Buy and was told that I could certainly return it but that they charged a 15% restocking fee because the box had been opened.  Excuse me?  The guy in Delaware said nothing about a restocking fee!  I was told that if I were to exchange the camera for another camera then they wouldn't charge me the 15% but if I wanted to exchange it for something else or get my money back then the 15% would apply.  Seriously?  Everything was back in the box and repackaged like almost brand-new but that didn't matter as the box had been opened.  I briefly looked at their other cameras but then decided that they could just charge me the 15% and I would never darken their door again as what would happen if we got another camera and didn't like it any better?  Nothing for nothing but with a lot of cameras, you don't know how you're going to like the pictures until you've taken a few and that requires you to open the box!!  The girl at the counter told me that the other salesclerk should have told me about the restocking fee when I bought the camera but even if he hadn't, it was on the back of the receipt.  Right ... like I read the backs of receipts!  Not that I'll ever have to worry about reading the back of a receipt from Best Buy again anyway - I don't care if they're practically giving things away, I will never shop there again.  The whole thing notched my grouchiness level up a couple of points.

After all that I decided that lunch was in order so we went across the street to drown my frustration in Olive Garden's unlimited soup, salad, and breadsticks.  Nothing says "go away bad feelings" better than their Chicken and Gnocchi soup ... unless it's the Zuppa Toscana of course!  Nom, nom, nom!  At least I left there in a better mood but it slowly crept back up on me after we got home.

I'm back to work for 16 hours today so we'll see how my mood goes - I'm hoping for a good day with no drama or trauma or stress.  Probably a lot to ask for but maybe I'll get lucky!  Keep your fingers crossed for me and in return, I promise to try to get some pictures of Baltimore up soon - honest!
Posted by Linda at 8/05/2010