How To Feel Dumb in the Comfort of Your Own Home

I love game shows. No, let me amend that. I love intelligent game shows. Game shows where the contestant has to have at least a couple of brain cells to rub together in order to win a prize and not just jump up and down and act like they're about ready to have a seizure.  Those kind of game shows I don't love.

Those who are regular readers of this blog are probably aware of my futile attempts (groan!) to pass the audition test for Who Wants to Be a Millionaire - curses on Gwen Stefani and her b-a-n-a-n-a-s!  I've made the trip down to New York City three times in order to allow myself the chance to feel like a complete and total dolt and chances are, I'll try it again one of these days as it's now become a challenge to prove to myself that - given enough tries - I could actually pass the test.  Not that just passing the test gets you into the Hot Seat - there are several more hoops to jump through before that happens - but at least I could say I made it through the first hoop.  Someday.  Hopefully.

In the meantime, one of my other favorite game shows - the Crème de la crème of all intelligent game shows in my humble opinion - Jeopardy! just recently held their online contestant test so I figured why not?  I hadn't been made to feel like a complete and total idiot in awhile so why not give it a go?   I signed up online for the East Coast test and logged in last Tuesday evening as instructed where I was greeted by Alex Trebek - 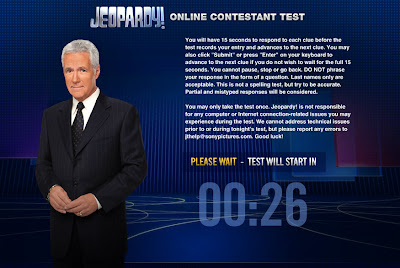 You're given 50 answers and you have 15 seconds to respond to each one.  Unlike the actual show, your answer doesn't have to be in the form of a question and your spelling doesn't have to be perfect but it helps!  It also apparently helps if you're as smart as Albert Einstein as some of the questions seem like things that no common man or woman would ever know.  Well, at least not this common woman!  Questions like - 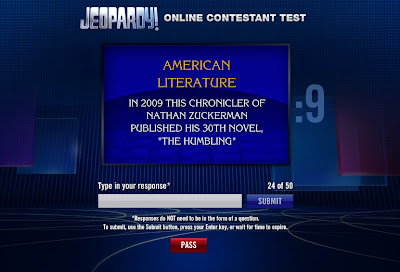 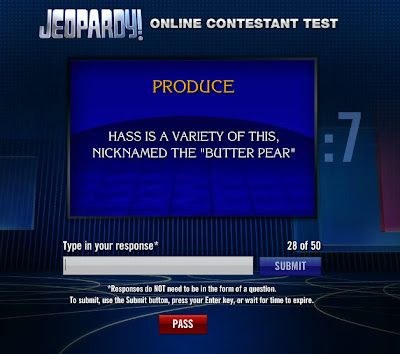 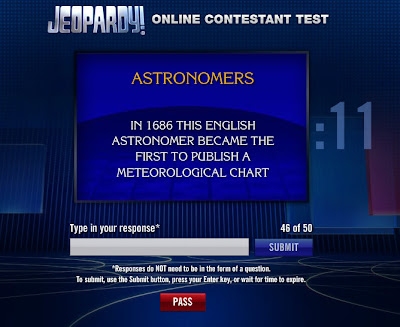 
I'm not sure if I even got half of the responses right so I'm certainly not going to hold my breath and wait for an invitation to attend the next round of the contestant search to be held in Boston, which would be the city closest to me.  As a matter of fact, I'll never know how well I did or didn't do on the test as Jeopardy! never notifies wanna-be contestants whether they actually passed the test or not. 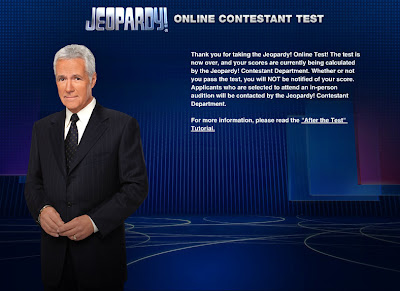 Instead one just gets to sit home and beat his/her head against the dining room table while muttering "I'm so dumb, I'm so dumb, I'm so dumb" over and over again - which I guess beats telling oneself that on the 2-hour drive back from Manhattan!  Ah well, hope springs eternal ... hmmm, I wonder when can I sign up to take the Millionaire test in New York City again??
Posted by Linda at 2/02/2010