Yesterday - the 7th anniversary of my father's death - was pretty much what I would expect from the 24th of February - dark, rainy, and dismal.  Funny how some days just tend to match the anniversary. Just as Green Day's Bille Joe Armstrong wrote in Wake Me Up When September Ends  - 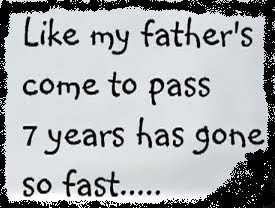 I've got to agree that the 7 years has gone so fast and sometimes I have to do the math a couple of times over to make sure it really has been that long. That doesn't mean that any of my family has forgotten by any stretch of the imagination, though, and I guess it was only fitting that yesterday was raining buckets - in my world anyway.  Feel free to wake me up when February ends.

On a lighter note, Amanda had an assignment in her Advanced Drawing class to do a self-portrait in graphite and this is the end result - 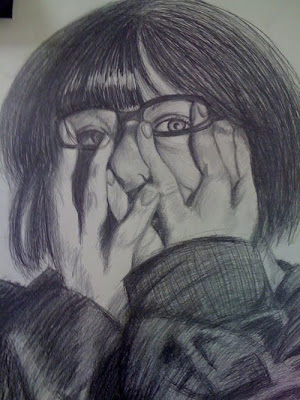 At least, that's a picture of the end result as the actual end result itself is being mounted and matted and then going on display at an art gallery in Mystic with a price tag attached!  Of the 16 students in her class, Amanda's drawing is the only one going on display which I think is pretty danged cool (insert goofy proud parent grin here).  Once Amanda remembers to find out just which art gallery the portrait is going to be displayed at I'll be sure to take a trip down there and get a picture of the picture.

In regards to her artwork, she's happiest with how the nose came out but I'm pretty impressed with both the hands and the eyes.  Well, actually as a non-artist, I'm darned impressed with the whole piece!  If it doesn't sell, I'm pretty sure I've got a nice spot on the wall for it myself even though I see that exact same look in real life quite frequently!
Posted by Linda at 2/25/2010