What does a gal do when there are two pretty cool Friday memes out there to participate in? Why combine the two, that's what!  Visitors today get a two 'fer as I just couldn't pass up either meme!

Tisha at CrAzY Working Mom has been hosting Looking at the Sky on Friday for quite some time now and it's a great meme that gives us the chance to show off some of our best sky shots - or the ones that we think are pretty darned good anyway! To that end I give you a shot of some fluffy white clouds and beautiful blue skies - something we here in New England haven't seen since Monday being that we are under the very gray clouds of a massive storm that has engulfed a good part of the Northeast.  Rumor has it we may get some sunshine back on Monday but in the meantime the best we can do is look longingly back at pictures from the past and wait patiently for more in the future. 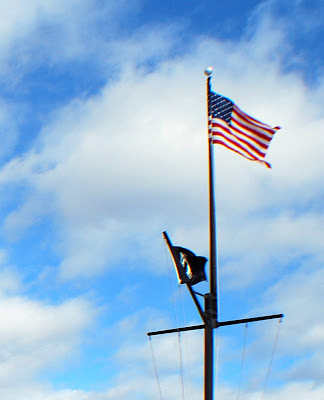 The other meme that I have been wanting to participate in is a new one by a West Coast blog buddy, Travis, who recently began Five on Friday where we can share a playlist of five of our favorite songs no matter what them we might be thinking of.  Being a complete and total music lover, this meme just kept screaming my name so here's my first go at it.

I decided to post five of my favorite pieces of music by film score composer and music producer extraordinaire Hans Zimmer. The man has done the music for over 100 different films including some of my favorites like Pirates of the Caribbean (the series), The Dark Knight, The Holiday, The Lion King, Backdraft, Driving Miss Daisy, Gladiator, and one of his most recent projects - Sherlock Holmes - for which he is up for an Academy Award that I sincerely hope he wins!

I'm one of those people who listens intently to the soundtrack when I go to a movie as I just love how film composers work their magic making the movie that much more enjoyable.  Amanda seems to have inherited that same trait as her iPod contains more Hans Zimmer music than mine does at the moment!  Thank goodness those years in concert band didn't go wasted!

It was hard to limit myself to just five pieces of music for this week as Hans Zimmer has so much good music out there but I chose - in order on the player - "Discombobulate" from Sherlock Holmes, the main theme from Backdraft, "Maestro" from The Holiday, "And I Thought My Jokes Were Bad" from The Dark Knight, and "Drink Up Me Hearties" from Pirates of the Caribbean:  At World's End.