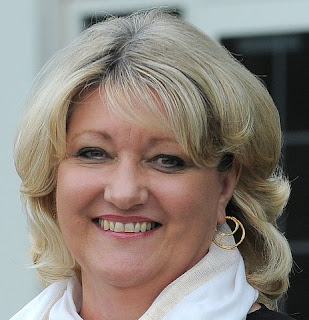 Just a few days over five years ago, I wrote a blog post wherein I called for others to help cheer on my blogging friend Gale Martin by joining the The Unofficial Gale Martin Novel Writing Cheering Squad  which was headed up by Frank of Foxxfyree's Honk'n'Holl'r. In order to inspire herself to spend less time blogging and more time diligently working on her novels, Gale told us ""For me blogging is like candy. It's a treat, like the one or two Swedish fish I have when I want to treat myself. In order to make myself finish my book, I'm only posting a blog entry if I've written three pages toward completing one of my two unfinished novels."

Wanting very much to see Gale's novel see the light of a publisher's office, we cheered her on in her endeavours with chants of "Go Gale! Go Gale! Go Gale!" but then it seemed that life got in the way and in spite of our very enthusiastic encouragement and cheering, things slowed down. BUT - and here's the important part - things didn't stop and last year I was overjoyed to learn that Gale's novel "Don Juan in Hankey, PA" was being released.  Granted, we had been cheering on a different novel with a working title of "Savage Grace" but that didn't matter one iota as DJ in HPA (as I've come to call it) was a wonderful read full of characters that came to life, humor, romance, and opera - something I didn't know much about but definitely learned during the course of reading about a small-town opera guild and their efforts to keep their heads above water by staging a production of "Don Giovanni".  DJ in HPA was one of those books that I just hated to see come to an end as I wanted to read more about the characters' adventures and lives and as I closed the book I thought "that couldn't possibly be it, could it??" 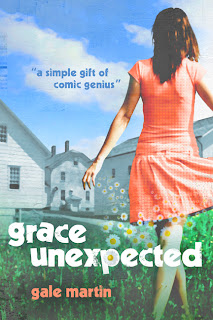 Fortunately for me, Gale is now working on a companion book to DJ in HPA but in the meantime, that novel that we were cheering on long ago is finally being published by Booktrope under the title "Grace Unexpected" and I couldn't be happier or more excited if I tried.  Yes, part of it is because there's a very small character in the book named after me (woohoo!) and part of it is because I am listed in the acknowledgments (what a treat!) along with Frank and other members of the unofficial cheering squad but mostly because Grace Savage has been waiting patiently to come to life full of snark and humor and sarcasm (a gal truly after my own heart!) for way too long and I am thrilled to see her finally make her debut.

I am also very, very happy for Gale who I knew was a fantastic writer long before other folks in the publishing world finally figured it out!  I'm so glad that the light finally went on for them and I hope that as more and more people read Gale's novels, they too will see that she was a talent who was undiscovered for way too long!

In the meantime, as part of this week's book launch for "Grace Unexpected", it was my pleasure to ask Gale a few questions about herself and her new novel as well as one about "Don Juan in Hankey, PA".  I hope you'll take the time to read the Q&A but more importantly, I hope you'll take the time to read one of Gale's books.  Afterward feel free to come back and tell me, "You were right, I loved the books and I want more!"

Which came first? The Shaker Plan or the main character?

The character Grace Savage preceded the Shaker Plan. It’s her essential nature - fun-loving and earthy (okay, too fun-loving) - that drives the conflict, that ramps up the stakes of the story. If there had been no need for Grace to reform - to change her ways - the Shaker Plan would’ve have been unnecessary.

That’s a fair question. I think there’s a bit of yourself in every character and even more of you when you have a single protagonist through which you filter a tale. In some ways, Grace is my wish fulfillment. I always wanted to travel broadly, so I made Grace a great traveler though I myself am not well traveled. Same thing goes for boobs. Grace has great ones, and I . . . well . . . *author mumbles incoherently into her shirt sleeve.*

Besides grade-A tatas, you also can endow your characters with qualities you wish you exhibited more often. For instance, Grace is braver than me - I never would’ve abandoned someone like Lacy in the Nutshell. Grace is also more quick witted. Let me rephrase. I may think witty things, but I am not often inclined to share them for a myriad of reasons - job, family, decorum, hang-ups. By the way, I’m very funny when I do puppetry, too. Speaking through another persona in literature or through the medium of a hand puppet is liberating for me. These conventions allow me to let my hair down, so to speak.

Compared to most people, I believe I had an unusual reaction when I visited Shaker Village at Canterbury. While I was inspired by the order and the ingenuity of the Shakers, I thought it was a shame that generations of women bought into the myth that they couldn’t be the equal of men without sacrificing intimacy with them. Take that reaction and torque it up a few degrees for someone in her thirties who is in the prime of her mating and baby-making years, and you have a Grace Savage-scale response to the Canterbury settlement tour.

In terms of Grace’s libidinous character, well, I’ve been married for at least two decades—to the same person. So, I was relying on anecdotal information about the sex and mating habits of unattached young people. I am always surprised when women presenters at writing conferences say things like, “Oh, I’m just so glad I didn’t have to put any *looks around nervously* s-e-x in my book for it to be published,” like sex is evil or degrades fiction automatically with its inclusion. Why sex makes for such objectionable content in fiction written by women, other than in bodice rippers, is beyond me. It’s an important part of life. And if I were young and attractive and also unattached like Grace, it would be an important part of my life, too.

Did you know a lot about anthropology before you wrote the book?

Nada. Ah, and this is one of the things I love about writing fiction. I knew nothing about anthropology. Never even took a course in college. Only ever watched Indiana Jones movies. However, I have lots more interest in things like anthropology as I get older than I did when I was younger. Believe it or not, even for writing contemporary fiction, you have to do research. I have two big fat three-ring binders full of articles I used to do research for GRACE U. I even researched hot air ballooning and romantic hot air balloon getaways to write the book. Also things like weirdo freaky car shut downs on highways, and, of course, more Shakespeare. Even English majors can study more Shakespeare.

I probably couldn't write good dialogue if my life depended upon it so how did you get so good at writing dialogue?

Thank you for noticing that. I had a contest judge tell me my dialogue was the best of any entrant’s which was nice to hear since I didn’t win the contest. My first novel had no virtually no dialogue in it - that’s the truth. It was autobiographical fiction, and I was afraid to let my characters talk -- that I wouldn’t reproduce the conversations with enough authenticity. (And now they won’t keep quiet.) Actually, I read Gloria Kempton’s book on how to write dialogue called Dialogue  (from the Writer’s Digest Write Great Fiction series), did all the exercises, and rewrote that first book. Gloria’s handbook made all the difference for me. Then I took a class from her (online) and showed her everything I learned. Now, I like dialogue so much, I think I should write plays or something. I also LISTEN to how people really talk wherever I go. I’m a huge eavesdropper, just trying to catch the authentic flavor of casual conversation.

I also learned to write other stories besides things that have actually happened to me because fictionalizing your own life can be very limiting. Often, you can’t let go of such a limiting perspective in trying (too faithfully) to record what really happened and what was said. I honestly think my best dialogue and my best stories are yet to come.

What was the hardest part about writing your new book?

I wanted Grace to be a sympathetic character but I didn’t want her to be pathetic. Or too perfect. I honestly hate too-perfect women - like all the heroines in Mary Higgins Clark’s books. (Yes, I read them because she has an effortless writing style that I admire. Yes, I hated her protagonists.) Yet, you can’t give a character too hard of an edge or your reader might not like her. Striking that balance is difficult.

While it’s easy to make a 24-year-old guy appealing, how do you make your reader believe that Grace might be attracted to a 60-something man, who is more than 20 years her senior? There is a prototype for True from real-life. When I was 34, I did a benefit with a man in his sixties. Developed a total crush on him. Yes, I was married. It was one of those crushes-from-afar type attractions. But he was so talented and suave and confident that (unbeknownst to him) he became a character in a book I wrote fifteen years later. I attempted to tap into some of the feelings I experienced upon meeting and befriending this older gentleman all those years ago. Some people you never forget.

Now there’s a doozy of a question. I think I would have Arnaud meet Goody. Perhaps Arnaud would hire Goody to run the balloon store since he’s so busy with his volunteer work with the guild. It would also be tempting to put Leandro Vasquez together with Lacy McBride. The man might meet his match in that vixen. Surely such a pairing would make for steamy scenes (except that I’m not a great steamy scene writer—more like funny and steamy - with the promise of sex fizzling out by the end of the scene for one reason or another.) 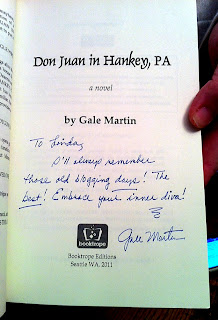 Gale Martin’s humorous backstage novel Don Juan in Hankey, PA was published by Booktrope Editions in 2011. She has a master of arts in creative writing from Wilkes University. She has worked in higher education marketing for ten years and lives in Lancaster County, Pennsylvania, a rich source of inspiration for her writing. Her blog “Scrivengale” can be found on her website at http://galemartin.me.

An online book launch for GRACE UNEXPECTED continues through July 20 at Gale Martin’s website: http://galemartin.squarespace.com/grace-unexpected/. Win one of 30 different ebooks from dozens of authors, copies of GRACE UNEXPECTED, or the grand prize - a big bag of paperback books by stopping in during that week and signing the guestbook.

In addition, there are a limited number of print review copies available and numerous ebooks for early readers on a first-come, first-served basis. Simply email galemartin (dot) writer (at) gmail (dot) com to request one.