Amanda has been dabbling more in a comic book style of art lately where she is drawing stories in panels. A lot of them make absolutely no sense to me whatsoever but then again, I'm old so that's to be expected! Some of her ideas she gets from whatever songs she happens to be listening to as is the case in the above video. The song that she is doing the drawing for and which is playing in the background is called "Aim For the Head" by Creature Feature, a band that is, in their own words, "an outlet for the imaginations of a couple of movie-mad fiends". 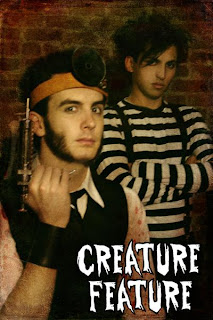 Handsome gentlemen in a creepy kinda way, aren't they? The band which was formed on Halloween - of course! - has been described as "a band that forces you to remember why you used to sleep with the lights on" and is comprised of the Los Angeles duo of Curtis RX on guitars & vocals and Erik X on keyboards. As a band that specializes in "the macabre, the hidden, the whimsical, the concealed, the nightmarish, the unseen, the morbid, the unexplainable, the ghoulish, and the unfathomable" they are right up Amanda's alley and have become the inspiration for a lot of her recent artwork. After all, who doesn't enjoy a good scary story?

Their debut CD, which contains ten tracks of songs which really appeal to fans of Edward Gorey, Edgar Allan Poe, Tim Burton and Danny Elfman as well as classic horror and sci-fi movies, is titled The Greatest Show Unearthed. The CD has been touted as "a gleefully ghoulish set of goth-rock tunes that mix pop hooks with horror-movie atmospherics" complete with "the ultimate combination of slinky, carnival-esque keyboards and raw, sexy guitar riffs." I'm actually starting to kind of like it! 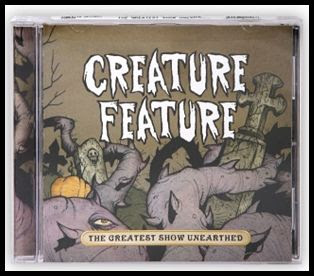 Because Amanda tends to play the music over and over, especially while sketching out some new artwork and we live in a very small house where there's no escaping whatever music happens to be playing unless one or the other of us is wearing headphones, I've had the opportunity to listen to some of Creature Feature's music and there are several songs that definitely remind me of the soundtrack to Tim Burton's The Nightmare Before Christmas - especially the songs "A Gorey Demise" and "Such Horrible Things". The title track sounds somewhat like a dark and eerie carnival that would fit nicely in a small town in Maine in one of Stephen King's stories - scary things lurk around every corner and you fully expect the carnival barker to be nothing more than a demon with mayhem on his mind. I would suggest you stay away from the cotton candy and the games of chance! 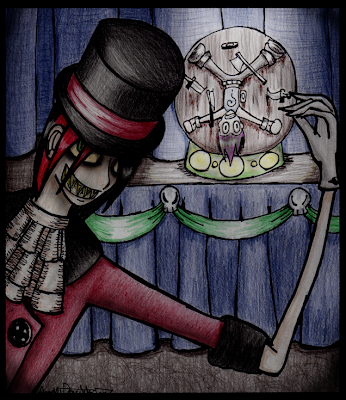 The Darkest Show Around,July 2007, by Art Munkey
based on the song The Greatest Show Unearthed

Ah well, and to think that my parents shook their heads in despair when I listened to the music of Elton John or Led Zeppelin ... ha!
Anyhow, for those interested in seeing the first page of the comic of Amanda's efforts in the video above where she is working on the second and third panels on the second page, click on the picture below for a bigger view of the completed version and don't forget to watch out for flesh-eating monsters! 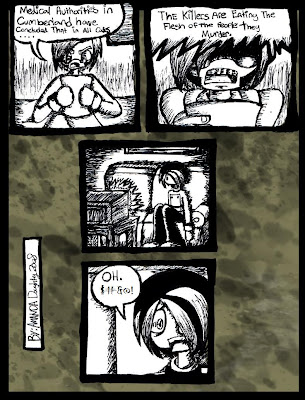 Should you like to listen to a little bit of Creature Feature, allow me to feature a video of their song, "Buried Alive", the only video released from The Greatest Show Unearthed. If you listen closely to the lyrics you'll definitely pick up on shades of Edgar Allan Poe in this song. Catchy, isn't it?