It's Saturday Night ... Do You Know Where Your Social Life Is?


I must be stuck in the 70's this week as I'm pulling another song out of my past to post this evening. This one is by the Bay City Rollers, a Scottish pop/rock band that hit it big in the mid-70's and then faded away into obscurity in the early 80's. This particular song, "Saturday Night" was quite popular in 1976, the year American turned 200 years old and I graduated from high school. Yep - I am most definitely showing my age!

Ever since I can remember, Saturday nights have not exactly been the big thing for me that they are for a lot of people. It wasn't "date night" or "hit the town with my friends night" so much as it was "stay home and feel sorry for myself night" or a night where I could watch TV by myself while grimacing at every commercial for Sun-In spray-in hair lightener, Clearasil acne treatment, or Pearl Drops tooth whitener. Not that I needed any of those things per say but maybe they were all part and parcel of the reason I was sitting at home on Saturday night rather than going out and having a good time like every other teenager in America. 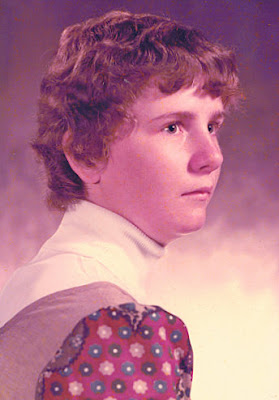 Myself, circa 1976
Even though I don't think I was particularly unattractive, I wasn't the type of girl that the boys gravitated to unless it was in the form of a friend. Story of my life pretty much when I stop and think about it. My cousin Diana had a boyfriend, my cousin Pat had a boyfriend, my best friend Diane had a boyfriend ... I had a lot of boy friends and that's pretty much where it ended. That's not to say that my entire four years of high school was nothing but an arid desert but for all that I went out, it might as well have been. Heck, I didn't even get invited to the senior prom (and don't think that still doesn't depress the hell out of me all these years later!).

After all this time I've rather gotten used to having non-social Saturday nights but every once in awhile, I tire of it. Perhaps it's because the weather is finally warming up and it's as Alfred Lord Tennyson penned in his poem Locksley Hall, "In the Spring a young man’s fancy lightly turns to thoughts of love." No doubt in the Spring a woman's fancy (even if she's no longer young) might also turn lightly to thoughts of love - or at least a little company once in awhile! Add on the fact that I haven't been on a date in longer than I can remember and it probably all makes sense!

Earlier this evening, while on my way back home from an exciting trip to get groceries, I was wondering if I'll ever actually go out on a date again or if the rest of my Saturday nights are going to be spent with my blog or an exciting game of Bejeweled on the XBox? If I had one of those Magic Eight Balls, chances are real good it would say -

- so I won't. I'm afraid I'd turn bluer than the background of the text above but I guess if I could make a wish on one of my own "wishing stars" I might actually wish for a date with a handsome man with a great sense of humor who liked to slow dance. Now that would be a nice Saturday night for a change!

Oh well, time to end the pity party. I guess I'll see if Amanda is up for a little Rock Band on the XBox - no sense wasting the fact that she's actually home for a change tonight! It's not a date but at least I've got a teenager that doesn't mind spending time with her mother - sometimes!
Posted by Linda at 4/05/2008