Of Dispatch Conferences and Such

Now, technical issues and excuses aside, I first off want to thank everyone for the thanks and best wishes that they have left in comments in regards to this being National Telecommunicator Week. I was telling Mimi the other day that when I make mention of the fact that it is National Public Safety Telecommunicators Week I almost feel like I'm throwing that out there so that people will say "Oh! Thank you for the job you do!" but that's not the case at all. I mention it because I want people to be aware that there are some truly fantastic people who play a major role behind the scenes (or behind the phone and radio lines) that are very rarely thought of, never mind thanked. I don't do it for me, I do it for every man or woman who has ever answered a phone with the words "911, what's the address of your emergency?" because - honest to God - we never know what that emergency is going to be and how it's going to affect us. And affect us it does. I have taken more calls home with me then I care to remember and there are those that haunt me to this day but this profession chose me (do you think anyone in their right mind would actually choose this profession themselves?!?) and it's what I do. There are times I like to think I do it well but then there are probably more times when I question my ability - as well as sanity! - in doing it.

Anyhow, to get off of my soap box now - this week has been wonderful. I was able to attend a great Telecommunicator Conference on Monday where I got to eat some darned fine prime rib and listen to one of the most dynamic speakers I've heard in a long time. Kevin Willetts, a dispatch supervisor from the Redwood City Police Department in California, is the kind of supervisor that every dispatcher would love to have and he was not only extremely funny but extremely inspiring. He makes me proud to be a dispatcher though there are times when I want to run screaming from the room and he could probably do a complete stand up comedy act on "You Might Be a Dispatcher If ..." (but unless the audience was made up entirely of dispatchers as it mostly was on Monday you probably wouldn't get it). I haven't laughed that much in a long time and I want to thank my company for sending me to the conference. It was more than worth the 100 mile round-trip drive. 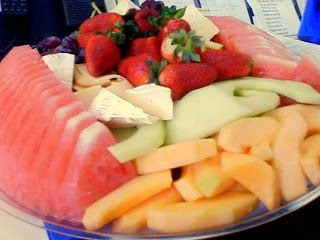 Speaking of my company, they have been plying us with edible goodies this past week that have ranged from muffins and bagels to veggie platters to this fantastic fruit and cheese platter you see here to pizza and salads from one of my favorite pizza places (the one I mentioned in my last "I've Got a Question, You've Got an Answer" post). If there's one thing dispatchers appreciate it's food and we've been having some really good stuff this week! In addition to that, one of my favorite EMTs, who happens to be just too cute for words (I swear, they never made guys that looked like that when I was that age!), brought me up some cookies and chocolate covered pretzels yesterday along with a hug and a kiss. I shared the cookies, brought the pretzels home for myself, and cherished the hug and kiss. Seth - don't feel like you need to wait for a special week to do that again! 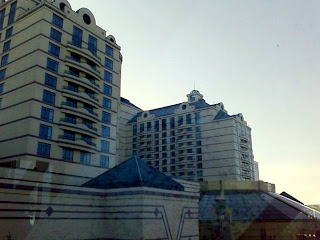 In the meantime, what else have I done while Amanda is away in New Jersey? Not as much as I'd like but I did go try my luck again at Bingo last night with my Mom and favorite aunt out at "the wonder of it all" - Foxwoods Casino. I snapped this picture with my cell phone so hence the lousy quality but it might give you a small idea of just how huge this place is. That's the Grand Peqout Tower Hotel in the background with the Great Cedar Hotel in the forefront. At least I think that's what it is! What you can't see from this picture is the enormous MGM Grand Tower that is going up behind it that opens in May.

Unfortunately, my lousy luck still holds as I wasn't able to break my 28-year losing streak but it was nice to spend some time with my Mom and she was nice enough to buy my Bingo cards as well as the specials so it didn't cost me a thing. I would have been more than happy to pay her back had I actually won but I don't think Mom was banking on that happening - which is a good thing! 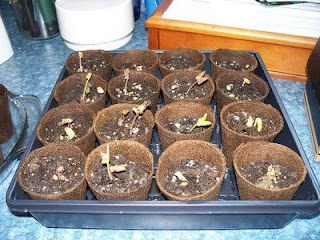 I'm going in for the evening shift today rather than my usual day shift as one of the other dispatchers needed to switch shifts so prior to that I'm going to try to get a few things done here around the house. In addition to some random cleaning, one of the main things I need to do is get those small morning glory buds I put a picture of in my Manic Monday post into a flower pot. Remember how small they were just a couple short days ago? Well - look at them now! They've really shot up and I don't think keeping them in just those small peat pots is too healthy for them at this point. Good thing it's warmed up outside and it looks like Spring is finally 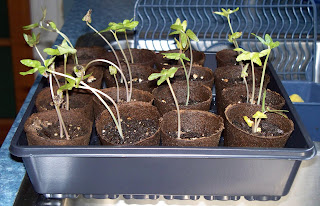 here to stay as these guys look more than ready to start twining their way up the posts on the front porch! Guess I need to start thinking about what other plants I want to get into my window boxes out there, too. Perhaps that's a good project for tomorrow and my day off!

For those of you who suggested I get myself into some "fun trouble" while Amanda is away, I'm afraid I'm going to disappoint you horribly in that respect but I can definitely say that I've been enjoying the peace and quiet of the house and not having to worry about the fact that "there's nothing good to eat" or "there's nothing to do"! Even though I miss her (a little bit!), this week has been going by way too fast and before I know it she'll be back and I'll have to go to the grocery store or I'll never hear the end of it! Sigh ...

Oh! One other thing just for the ladies before I forget! If you haven't had the chance to check out Mo's new blog Captured By Gravity yet then you just gotta go over and drool look at this post here! Normally I'm not a big one for just visual but for some reason my mouse keeps clicking on its own back to this picture ... gaaahhh ... oops, I'm drooling again. Mo, thanks! You sure know how to put a smile on someone's face!
Posted by Linda at 4/17/2008