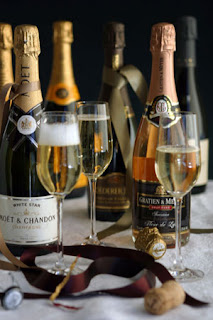 We had the Today Show on at work the other morning before things got too busy as we usually tend to do so that we at least have some sort of clue what's going on in the rest of the world and one of the segments they showed was on being able to pick the proper champagne for your New Year's Eve gathering. Some ditzy reporter, who looked like she was having way too good of a time trying to guess between an expensive champagne and a cheap one, was trying to explain the difference to Matt Lauer. Towards the end of the segment she had Matt close his eyes and try both an expensive bottled champagne and a "less expensive" canned version to see if he could tell the difference. Naturally Matt picked out the expensive champagne - which doesn't surprise me at all as I rather doubt that Matt has to worry about pinching pennies during the holidays and probably didn't even know that canned champagne existed (frankly, I didn't either!).

There certainly won't be any party this year as I'm going to be spending the vast majority of New Year's Eve at work as Monday is my regular 16-hour shift which means I should get home a bit after 11:00 p.m. That should be just enough time to climb into my pj's before I join the girls for a glass of sparkling cider and then change the calendar over while I wonder just where in the heck it was that the year got off to.

So, that's what I'm going to be doing but what about the rest of you? This week's questions asks -

I don't believe in making New Year's resolutions - the only one I've ever really kept was the one that I made to not make any more resolutions! - but perhaps I'll resolve to go to a real New Year's Eve party one of these years. I bet a New Year's kiss would be nice ...
Posted by Linda at 12/29/2007