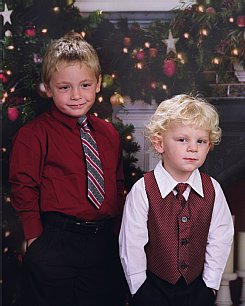 I'm afraid that I have been failing miserably in the Grandmother Department of my blog and that it's been a long time since I posted any pictures of Christopher and Mathew. Matter of fact, I think it might have been way back in July since I posted pictures from the boys' combined birthday party and surprised a few people with the fact that I am, in fact, a grandmother.

It's not that I have any problems with being a grandmother; after all I can certainly be 39 years old and quite easily be a grandmother, right? Oh wait, you guys know I'm not 39 years old, don't you? Curse me for ever putting that darned birthday counter in my sidebar!

Ah well, be that as it may, these two fine looking young gentlemen who are all dressed up for Christmas (and probably never wore these clothes again once they got home from their photo-shoot!) are in fact my grandsons - Christopher, with the dark hair, is obviously the oldest while that curly-haired 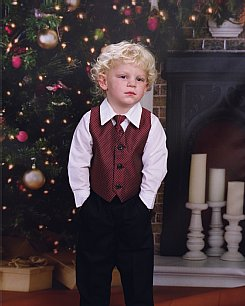 blondie is young Mathew Kendall who will be 3 in June and is probably the only child my only son will ever have. Considering that Michael always said he was never going to have any children ever, I guess we can almost call Mathew a miracle child!

Two of my good friends, Rhonda and Cyndi, are grandmothers also and we all have grandsons (where are all the granddaughters?). Naturally I sent these pictures off to both of them (these are copies of the proofs) and the email that I got back from MizCyn was too good not to post here! After all, we grandmothers do like to hear these sorts of things and then share them with the rest of the world! 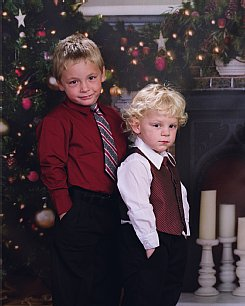 To quote my dearest friend in California: "All grannies think that their lil' darlings are the cutest use of DNA since Johnny Depp -- but as one granny to another, I'm shocked to say that you might have me beat on this one! Talk about little heartbreakers!"

High praise indeed from one of the proudest grandmothers on the West Coast! I've yet to hear back from Rhonda but she's been having some computer issues as of late and may have had to have the Geek Squad back out for some repairs so she might not have gotten the pictures yet. Rhonda, though, is the consummate grandmother and I'm sure she'll have nothing but glowing things to say. 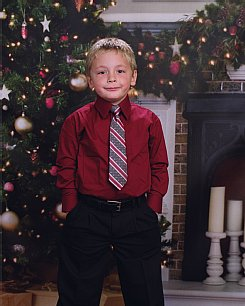 I could probably take a few "Grandmother" lessons from both Cyndi and Rhonda but I've got a good reason for not posting a lot of pictures - I don't have that many! However, with the Christmas gift that Michael and Laura are getting, I'm pretty sure I'll be getting pictures more often and then can share them more often!

As for these pictures, even though I'd have to say that the picture in the upper left-hand corner of this post is probably my favorite, I just had to post this last one as it really makes me smile as I can just hear what the boys were probably thinking ... 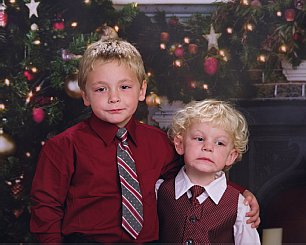