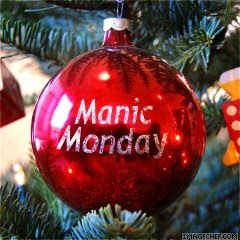 I feel so honored as Mo picked this week's Manic Monday word "Ornament" just for me! Well, technically I merely suggested it because I didn't think that last week's word "Ship" was very seasonal so he picked my suggestion for this week but I'm still going to feel special because I can! Besides, it gave 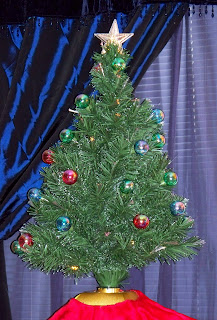 me added incentive to get my Christmas decorations up!

I'm afraid that as I've gotten older, I've gotten pretty lax about decorating for the holidays and don't even do a full-size tree anymore - or a real one either. I always said I would never have an artificial Christmas tree but if there's one thing I've learned in life it's to never say never and now I not only have an artificial tree but it's one that I don't have to do anything with other than take out of the box, set on the table, fluff a little, and then plug in. Poof! Instant Christmas tree!

It's actually a very cute little fiber-optic tree and my only complaint is that it doesn't have that Christmas tree smell to it. That's one of the things I miss about not having a real tree but over the years, it seemed like even the real trees just didn't have that smell I remembered from my childhood. The nice thing is I don't have to worry about knocking it over while I try to water it and there are no needles to vacuum up! The other thing I miss is that I have all these great orna 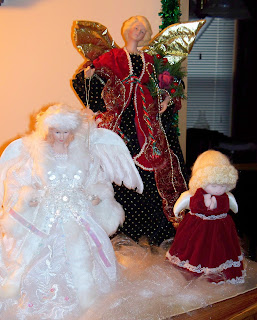 ments that now never leave their boxes because I can't hang them on my little tree. I've got some really nice ones, too but they spend Christmas in the basement.

In addition to my little fake tree, I have a collection of Christmas angels that I decorate with and I guess you could consider them to be ornaments of a sort as they adorn the top of my entertainment center and one of the definitions for ornament is "any adornment or means of adornment." They definitely do that as I clear the usual everyday stuff off and pack it away until after the holidays and then arrange my own little heavenly host upon some angel hair that looks just like a cloud. 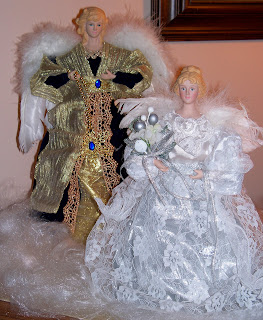 The only other ornaments I put up are some garland strands with colored Christmas balls at the ends that I hang up around the doorways and my white light Christmas deer that I put out in the front of the house. I had debated not putting the deer up this year but when Jamie asked me if I was putting it out this year and I told her I didn't think so she sounded pretty disappointed. I immediately changed my mind and put the deer up yesterday so that it would be there when she comes home next Tuesday.

It now officially looks like Christmas around the House of Mouseski and who knows, maybe I'll even break out a CD of Christmas tunes to listen to other than the Nickelback I've been listening to on the stereo this weekend! Well, maybe ...

Want to know what other bloggers think of when they think of the word "ornament"? Then go check out Manic Monday at It's a Blog Eat Blog World and while you're there, tell Mo "Ho Ho Ho!"
Posted by Linda at 12/10/2007