Chasing the Echoes of My Past 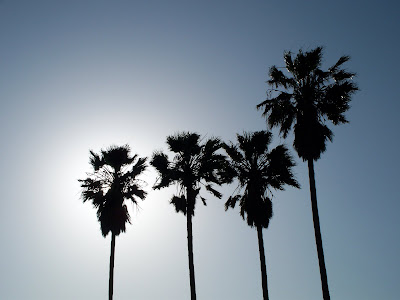 Palm Trees near the Stockton Channel


The past few days in Stockton have been a time of meeting new friends and reconnecting with parts of my past that, to be perfectly honest, I never thought I'd see again. It's been an opportunity to see how much has changed in this city I used to call home and how much has also stayed the same over the years. As I told Cyndi when we were driving around on Friday, she probably can't see the changes as much as I can as she's lived here all of her life and sometimes it's hard to see the forest for the trees, as the saying goes.

In the past few days I've seen a Stockton that has grown way beyond the northern boundaries that I used to dispatch to and a downtown that has been attempting a revitalization that is quite impressive compared to what it used to be. It boggles my mind a bit to know that I used to know pretty much every street in this city as I'm sure I'd be totally lost behind a dispatch console here now. Still - as I drove around both Friday and Saturday, I saw so much that was still so familiar to me and I found myself actually missing being a part of this community whether Forbes has ranked it as the second most miserable city in the country or not. 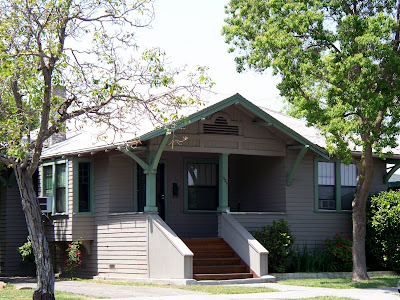 My former home on Lincoln Street


One of the places I made a point of going by was the house I used to rent from April of 1984 to late 1985. As I sat across the street in my rental car and looked at it, I was flooded with so many memories of my time there but I have to say that they were almost all entirely good. My parents came out from Connecticut to visit me when I lived in that house, I had the best roommate ever named Scott when I lived in that house, I had many a conversation over a cup of coffee with Cyndi in that house, my son Michael started kindergarten at the school across the street from that house ... It was a good house in a good neighborhood and Michael and I had been happy there. Too bad my landlord sold it and I had to move elsewhere!

After reminiscing on Lincoln Street for a little while I then drove over to visit Grandma Edith, who had no idea that I was in California. I wanted to surprise her and I'm pretty sure that's exactly what I did! At 85 years old the poor dear has pretty lousy eyesight so she had no clue it was me at the front door that her little dog Precious was barking so furiously at. When she asked if she could help me I said, "Well I certainly didn't come 3,000 miles to be barked at!" "Linda??" she asked incredulously before she opened the door and gave me a big grandmotherly hug. We spent a lovely afternoon together and she made sure to take me around to all of her neighbors and introduce me as her granddaughter even though technically I hadn't been that for a very long time ever since her grandson and I had ended our marriage while he went out to chase single women. Grandma Edith is as good as they get, though, and I will always consider her to be my grandmother no matter what. When I left I promised her that I'd be back on Monday and would bring Cyndi with me as she's met Cyndi before and really likes her. 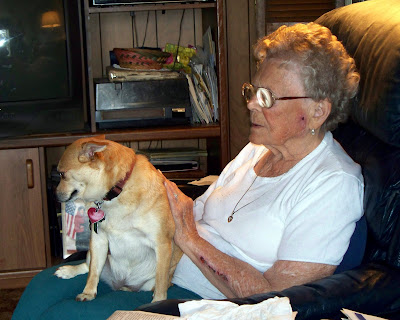 
Before coming back to my hotel, I decided to drive around Stockton a little more and take some pictures. It was a beautiful day with temperatures in the high 70's - low 80's and the sun was shining brightly in the sky. Considering that it was raining and in the 50's back home in Connecticut I was planning on taking full advantage of the beautiful weather! I've put together a slideshow and placed it at the end of this post if you'd like to see a little bit of Stockton.

Once I finished traipsing around town it was time to head back to the Courtyard Marriott and consider doing some laundry. Yep, I'm in California on a Saturday night and I'm in my hotel doing laundry - what is wrong with me?!? Prior to that, though, I needed to consider what to get for dinner as I'd rather neglected to eat all day. Hmm, what to get that I couldn't get back home that wasn't Mexican? Carl's Jr? In n' Out Burger? Manny's California Fresh? No ... wait ... I knew just the place - Jack in the Box for an ultimate cheeseburger and seasoned curly fries!

A burger you can't get in Connecticut!


I brought my cousin Amy's favorite California cuisine back to the hotel with me and as I took it out and - of course - took a picture for you, my readers, I decided that I wasn't even going to think about the calorie and fat count of such a delicacy as that would certainly suck all of the treat out of eating it. After all, they don't call it an ultimate cheeseburger for nothing and the fries aren't half bad either!


I'm not quite positive yet where our adventures will take us today but Cyndi and I will be back on the road and exploring somewhere in California. No matter where it is, though, rest assured that there will be a post with plenty of pictures! In the meantime, I hope enjoy these -