"Let Me Call You Sweetheart"

So - you're a teenager, your mom is going to California for a week, and you're going down to New Jersey to stay with your best friend - what do you do next?? Go to a concert! Better yet - go to two concerts!!

Actually, that's not exactly the truth. Amanda's plans for the concerts came into fruition long before my plans to go to California - which actually evolved around Amanda's plans to go to New Jersey. After all, bands tend to book concerts a lot further in advance than I would ever book a vacation and heaven forbid Amanda's favorite band, Mindless Self Indulgence, play a venue even close to somewhere nearby and she not be there! 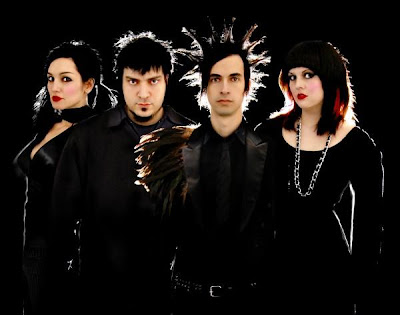 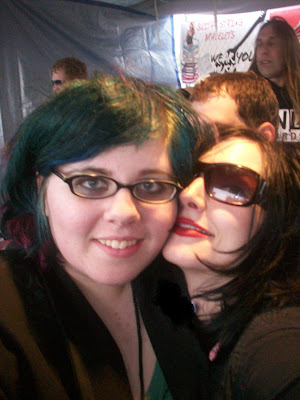 This time around MSI was playing at the Electric Factory in Philadelphia followed by Bamboozle at the Meadowlands in New Jersey and Amanda and her friend Darci had been looking forward to both concerts the better part of forever (in teenage time). The last time Amanda had seen the band was at Projekt Revolution in August and in that time they'd put out a new album, If, and grown quite a bit in popularity.

Amanda had become even more of a fan than she was before, if that was at all possible, and she was a nervous wreck as to whether or not LynZ, MSI's bassist, might remember who she was from when she met her backstage in Hartford. She called me several times in California wondering what she should say. 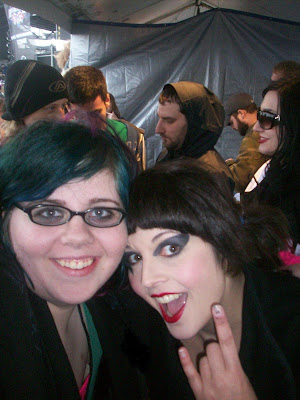 Turns out that she didn't have to say anything as LynZ recognized and remembered her right away and all of that fretting was for naught as nervousness turned into exuberance and excitement and a myriad of teenage emotions that I have probably long forgotten over the years but am sure I would remember in a New York minute if the bassist from my favorite band remembered me by my first name! I've never had the opportunity to hang around with the members of my favorite band (hmm, do I even have a favorite band?) and talk to them like they were normal people but I would imagine that it was pretty darned exciting for Amanda - so darned exciting that she talked about it non-stop from just outside of Philadelphia to the other side of New York City on our way back to Connecticut on Tuesday night! 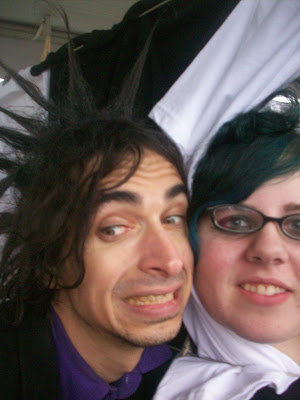 After MSI's set at Bamboozle, Amanda had the chance to talk to LynZ as well as get pictures taken with Kitty, the band's drummer, and also with Jimmy - lead singer and performer extraordinaire. Regular readers will remember Jimmy from my posts of last year's trip to Projekt Revolution as well as the excitement of JimJamz, the plushie doll Amanda made for Jimmy, making his own stage debut. Jimmy immediately remembered Amanda as "the plushie girl" and later referred to her as "sweetheart" and gave her a big kiss, something she was totally thrilled about. As for this picture, no - Amanda isn't wearing a scarf and Jimmy isn't constipated! It just looks that way on both counts! Regardless she sure looks happy, though, doesn't she? She might have looked happier had the security guard not been rushing them along and she could've gotten a better picture but for now, any picture with the flamboyant lead singer of your favorite band is better than NO picture with the flamboyant lead singer of your favorite band! Oh, and for the record, Jimmy still has JimJamz on the tour bus! 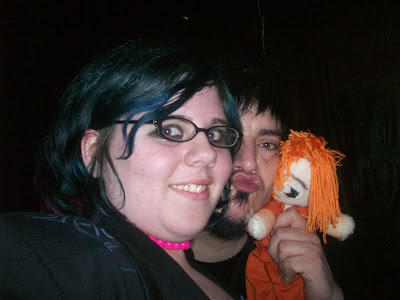 Of course, I can't leave out the other member of the band, Steve Righ? who is the guitarist and occasional back-up vocalist. Again, regular readers might remember the saga of the pantless plushie that Amanda had made in Steve's likeness and who eventually became fully clothed last November. She was finally able to proudly present the panted plushie personally and Steve was quite taken with the little guy (but not the pins she had used to hold his pants up with!).

All in all, Amanda and Darci had a fantastic time and they are now looking forward to July when MSI will be performing in nearby Hartford, a concert we will be attending along with Jason, Amy, Cate, and Amy's mom. I'm sure it's going to be a great time and I can guarantee you that there will be a post or two that comes out of it! At least!
Posted by Linda at 5/12/2008