Pain at the Pump Meme

Here it is, Memorial Day weekend - the kick-off to summer and a time when a lot of people generally hit the road to take a much-needed end-of-winter break. Well, at least that's the way it's been in the past but I get the feeling that a lot of people had to think long and hard about hitting the road this long weekend due to the prohibitive cost of gas.

I have absolutely no plans to go anyplace this weekend what with having to work an 8-hour day Saturday, a 14-hour day Sunday, and a 12-hour day on Monday. However, I thought it might be a good idea to top off the gas in my car before prices went up any higher as the last time I put gas in I paid $3.83 a gallon. What I ended up with was this - 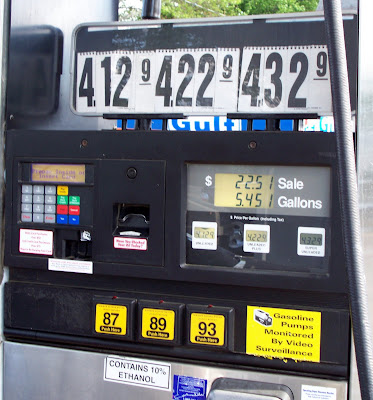 I've got to say I'm counting my blessings that I have a very short ride to work (about 3 miles roundtrip) because I'm able to get away with filling up about once every two weeks. I'm not sure how people who have to drive further than that are affording to put gas in their tanks while also buying groceries and paying their other bills. The worst thing is - there doesn't seem to be any end in sight and I've got no doubt that gas will either be at - or hovering around - $5 a gallon by the end of the summer.

The thought occurred to me (blogger that I am!) as I was grimacing at how fast the sale numbers were flying by while the gallons inched along that there was no reason we couldn't try to have some fun with this while biting the bullet. After all, the rising cost of gas had to be good for something other than the bank accounts of oil executives, right? Maybe I could do something creative with this? Maybe I could write a post? Maybe I could start a meme? Yes, that's it - a meme! A "Pain at the Pump" meme! Brilliant!

A meme needs some sort of rules and structure though or it's not actually a meme (at least I think that's written in the Royal Book of Meme Rules somewhere) so here we go ...
That seems pretty simple, right? So, when you're done barbecuing those hamburgers and hot dogs, finished eating that last bite of potato salad, and disentangled your fishing gear and put it all away until next time - join in and show us your Pain at the Pump!

For my contribution, this is what Amanda and I found while en route to the grocery store this afternoon. Made me glad I paid only $4.12 a gallon at my local Cumberland Farms! 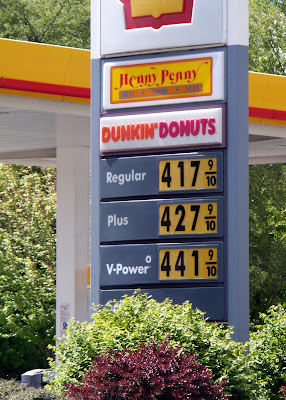 Email ThisBlogThis!Share to TwitterShare to FacebookShare to Pinterest
Labels: gas, Meme, Pain at the Pump