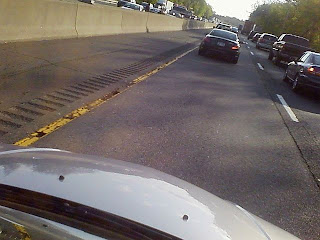 After a lot of anticipation and more nerves than were probably necessary, Amanda and I finally started out for New Jersey Wednesday afternoon around 3:45 when we began our trek down the Connecticut Turnpike from Norwich to Marlton and the home of her friend Darcy. Traffic was typical for I95 in Connecticut (way too much of it!) but it flowed along quite nicely until just about the New York border when the word "delay" first came into play for the trip. As we crawled along in traffic outside of Stamford, Amanda decided to take a couple of cell phone pictures - one of which is this one. And no, I wasn't driving sideways!

We finally arrived at Darcy's house almost 230 miles later and with only one wrong turn along the way. Not bad I'd say! I got to meet Darcy's family who had graciously offered to let me stay there and drive me to the airport in Philadelphia the next morning rather than having to pay parking fees. Darcy lives with her mother, father, grandmother, and her 9-year old brother Dylan who is a special needs child who is confined to a wheelchair and has his father's beautiful curly hair. After a late dinner of pizza, salad, and strawberry shortcake I crawled into bed with the alarm set for the un-Godly hour of 5:30 in order to get to the airport on time. 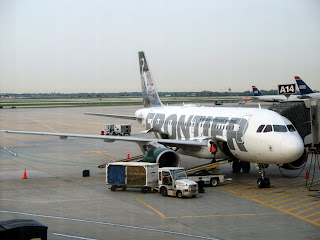 Darcy's mom got me to the Philadelphia airport in plenty of time and despite what I had heard, going through security really wasn't too bad. I chatted with another lady in line who was going to Los Angeles for 11 days and it turned out that she sat across the aisle from me on the very same flight I was going on! Unfortunately I got seated on the aisle for the first leg of my flight and not only that but it was the row in front of the emergency exits so the seats didn't recline. Argh! On the good side, though, there was no one in the middle seat so the guy by the window and I lucked out there as the plane was pretty packed.

We pushed back from the gate at exactly 8:00 when our flight was due to leave and then sat in line for almost 45 minutes while 14 other planes took off ahead of us. This would be the second time the word "delay" came into use. As I sat there listening to my iPod and trying not to think about windsheer and the risk of too many planes taking off one right after the other I wasn't too nervous as I figured from here on in it was up to the skills of the flight crew and God to get us to Denver safely. As a matter of fact, I nodded off I was so relaxed!

Take-off, which is the part of flying I hate the most, turned out to be so smooth I barely knew that we were in the air (especially not being in the window seat) and the remainder of the flight was quite smooth with the exception of some bumpy air over what I think might have been Kansas. As we approached Denver with almost all of our time spent waiting to take off made up, the Captain announced that it was snowing there. Huh? Snow? In May?  I hadn't listened to any weather reports so that was quite the surprise to me. We landed with no problems at all and I unboarded the plane into the airport only to find out that the plane for the rest of my trip was the one I had just gotten off of! I had enough time to stretch my legs, send a couple of text messages, and take a few pictures before getting back on board. 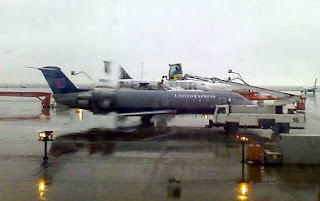 Again, we pushed back from the gate right on time and that's when the word "delay" came into play for the third time when we had to wait to be de-iced before take-off. The Captain explained the whole procedure and told us that it was going to be anywhere from 30 minutes to an hour before we would even get to the de-icing pads. This time I was lucky enough to be in a window seat in row #1 right behind the bulkhead and again there was no one seated between myself and the guy on the aisle (who was a little strange, I might add). My camera was in the bag in the overhead compartments so I couldn't get to it but I used my cell phone to take the picture of the planes next to us being de-iced. It isn't the best quality but I still thought it was definitely a "blogging moment". After an hour and 15 minutes we finally taxied out to the runway for our turn to take off but I really didn't mind the delay as I figured better safe than sorry, especially when it comes to being in an airplane!

Once we climbed to our cruising altitude of 36,000 feet the clouds were merely fluffy puffs of cotton below us and even though I was bit disappointed that I wasn't going to be able to see the Rocky Mountains, I still loved the view from my window as I surveyed the clouds below us and the blue sky above us. Even though I'm not real keen on the take-off part of flying, once we're in the sky I absolutely love it as there is nothing like looking at your world from a high altitude and marveling at the beauty of it. 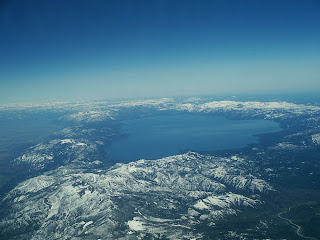 Having criss-crossed the country numerous times over the course of my life I've got a pretty decent grasp on the geography and had a pretty good idea of what we were flying over based on what I could see below me such as the Great Salt Lake and Bonneville Salt Flats in Utah. I was delighted when we flew past Lake Tahoe, one of my most favorite places in the country. It might be kind of hard to tell from that altitude but it really is gorgeous!

We finally landed at Sacramento Airport a good hour plus behind schedule but the sun was shining, the temperatures were in the 70's, and it was beautiful. After waiting for my bag to appear (apparently it was the first on in Philly and the last off in Sacramento!), I made my way over to the Hertz counter where I found a pretty metallic blue Mazda 3 5-door waiting for me. Considering I drive a Mazda at home - though a sportier version - I should have no trouble driving this car at all.

My hour drive from Sacramento to Stockton was uneventful, which was good as it was now a full 12-hours after I had started out in the morning and I was starting to feel just a little bit tired around the edges. Upon arriving at my hotel the guy at the front desk was extremely friendly and curious as to what on earth would bring me to Stockton for a vacation? Good question I suppose as I'm guessing a lot of people don't vacation in Stockton! I told him that I was here for friends and Mexican food and he said that sounded like reason enough and wished me a great stay after giving me a cookie and the key to an absolutely fantastic room.

The Courtyard Marriott is just as nice as I remember it from my March 2002 stay and I couldn't be happier with my room which, with a posted rate of $199 a night on the door, is a real steal at only $50 a night! It's roomy, comfortable, has a glorious king-size bed with six pillows, free internet access, and the shower alone was more than worth the 3,000 mile journey! Ah, now this is a vacation!!

Cyndi is on her way over shortly and once she gets here we plan on going by the Stockton Cemetery to pay our respects at our friend Timmy's grave (Timmy is one of the police officers I used to work with who was killed in the Line of Duty in February of 1990) and I always try to get by his grave when I am out here. After that, it's lunch somewhere with food I can't get in Connecticut and then tonight I'm going to be meeting up with Sandee of Comedy Plus and her hubby Zane and Katherine of Wading Through My Stream of Consciousness and her significant other at my beloved Cancun Mexican Restaurant. The place may never be the same! I'll keep you posted and I promise pictures! Now - on to the fun!