"I love you, Travis Willingham!!" 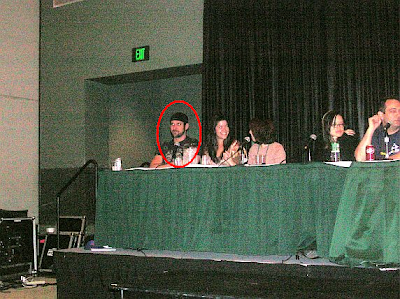 See the guy with the red circle around him in the picture above? Yeah, I know, the picture quality isn't all that great but that guy - ladies and gentlemen, boys and girls - is none other than Travis Willingham, the voice actor for Roy Mustang of Full Metal Alchemist. He is also one of the main reasons that Nicole talked her into aunt into taking herself and Amanda to Anime Boston this past weekend.

Nicole, who is Amanda's BFF, is what you might call a major league fan of Full Metal Alchemist and Roy Mustang in particular. Travis Willingham, along with Colleen Clinkenbeard, Laura Bailey, Mike Farland, Troy Baker, Greg Ayres, and Luci Christian, were all part of a question and answer session called "Voice Actor Round-up" that Amanda and Nicole attended while at the convention. At the end of the session, Amanda dared Nicole to yell "I love you, Travis Willingham" and Nicole, normally a rather quiet and reserved young lady, wasted no time in completing the dare and yelling just that - rather loudly. Just goes to show you what happens when crazed fans meet the objects of their animated fantasies!

For several days I had blissful peace and quiet here in Connecticut, while Amanda, Nicole, and hundreds of others descended upon the Hynes Convention Center in Boston for the biggest anime conference in the Northeast. There were cosplayers, voice actors, industry guests, artists, and vendors galore who all came together to celebrate Japanese anime, video games, and movies. There was a masquerade where skits were performed, the Cherry Blossom Ball formal dance, and a rave with glowsticks. Were I a 14-year old fan of anime, I would have thought I had died and gone to heaven - which is apparently just how Amanda and Nicole felt.

For the uninformed, cosplaying is when "like-minded people gather to see others' costumes, show off their own elaborate handmade creations, take lots of pictures, and possibly participate in best costume contests." You can't have an anime convention without lots and lots of cosplayers and this convention had lots and lots and lots of them. Neither Amanda nor Nicole did any cosplaying of their own but they had their picture taken with some of their favorite "characters".

Both Amanda and Nicole are talking about going again next year and doing some cosplaying of their own, but I'm afraid that they're going to have to find someone else to take them as apparently it wasn't exactly what Nicole's aunt was expecting! Having been to a "Star Trek" convention in New York City a long, long time ago I had a pretty good idea what they were going to encounter and it seems that conventions have not changed much over the years from the sounds of it. As much as I have no desire to ever attend one of those kind of activities again, I might could be persuaded to spend a weekend in Boston ... Amanda has a year to work on me and I suggest she start now!

Just as a footnote, members of the MCRmy (fans of My Chemical Romance) gathered at the convention to post flyers and stickers to promote their favorite band. For the even less informed, lead singer Gerard Way worked as a comic book illustrator prior to becoming a rock star (it's a small world, after all!)
Posted by Linda at 4/22/2007