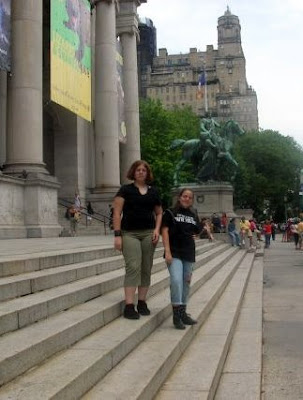 This week TN Chick of the Saturday Photo Scavenger Hunt had us looking for steps and my initial thought was to go over to the local City Hall building here in Norwich and take a picture of the very nice steps leading up to its main entrance. Alas, "the best laid plans of mice and men are ofttimes led astray" - especially when your teenage daughter takes your digital camera to the Anime Convention in Boston!

Okay, then, a quick back up to Plan B had me looking through my archives to see what I could find! Luckily I had a picture that was taken last summer when Amanda, Jamie, my friend Paula, and I took the train to New York City for the day and spent a good part of it at the American Museum of Natural History (yep, that would be the place in "A Night at the Museum" with Ben Stiller).

If you've been a regular reader of my blog you can see that Amanda has changed quite a bit since this picture was taken - at least her hair sure has - and you can also see that she's just beyond thrilled to be standing on the steps at the front of the museum with her sister while Teddy Roosevelt forever rides off into the sunset in the background.

Inside the museum were more exhibits than one could possibly see in just one day and it would have been very easy to have spent even more time there than we did but I had to go flunk the audition test for "Who Wants To Be A Millionaire" later that afternoon! Perhaps that's a story for another post sometime!

Of all that there was to see at the museum, one of the girls' favorite exhibits was the dinosaurs. Jamie absolutely loved all of the fossils and the picture below is of her favorite T-Rex. If you're ever in New York City and have the time, I would highly recommend a trip to the American Museum of Natural History - especially if you have kids! 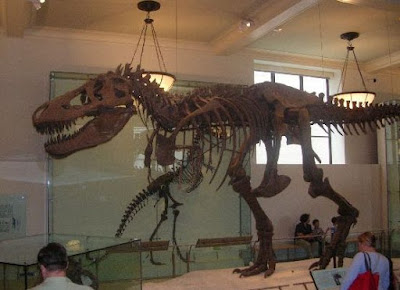