This doesn't bode well that I am writing a memorial post for yet another fallen hero and it's only the 1st day of February. Dare I hope that this doesn't set a trend for the month ahead? Can we keep the count below the 13 brave souls who died in January? Let's hope and pray so! 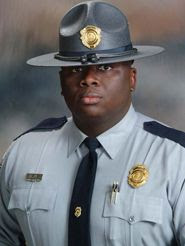 Patrol spokesman Sid Gaulden said the trooper’s car overturned several times before hitting a utility pole. Gaulden did not immediately know how fast the trooper was driving and also said that it had been raining in the area before the crash, which is still under investigation.

Lance Corporal Haynes, age 38, leaves behind a wife and two children as well as an entire department and law enforcement community that mourns his loss.
Posted by Linda at 2/01/2008