The month of February continues to be one of great loss in the law enforcement community and in particular, the State of Texas as two more officers join the Memorial Honor Roll on my sidebar following their deaths this week secondary to tragic traffic accidents. The last three Line of Duty Deaths have all come from Texas - two from the Houston area alone. 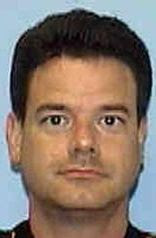 On Thursday, February 21st, Harris County Texas Sheriff’s Deputy Craig Miller died as a result of injuries suffered when his undercover unit collided with a truck that pulled out in front of him in west Houston.

Officials said Jose Vieyra was driving a box truck when he left a car dealership, crossed all three lanes of the Katy Freeway eastbound feeder road near Mason Road and hit the deputy's unmarked sport utility vehicle shortly before 8 p.m.

The impact caused the deputy’s vehicle to become airborne before landing across a concrete barrier that separates the service road from the freeway’s main lanes. Firefighters had to cut the deputy out of the vehicle in order to extricate him from the wreckage. Despite the best efforts of the rescuers, Deputy Miller died at the scene. The driver of the truck that caused the accident has been charged with criminally negligent homicide.

Family, friends and fellow officers mourned Miller's sudden death and remembered him as a funny man and devoted father. Miller, 43, is survived by a wife, Michelle, and two young children.

Miller, who joined the department in August 1987, was assigned to the Investigative Support Unit in April 2006, "I can't even imagine what the family must be going through," said Capt. John Martin, spokesman for the Sheriff's Department. "Our thoughts and prayers are with them." 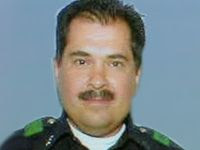 Senior Corporal Victor Lozada-Tirado, a 20-year veteran of the Dallas Police Department, died Friday morning, April 22nd, while escorting Senator Hillary Rodham Clinton's entourage to a rally near downtown Dallas when he lost control of his motorcycle after apparently hitting a railing and then crashing into a concrete barrier.

Cpl. Lozada-Tirado was in the rear of the motorcade on the Houston Street viaduct around 9:20 a.m. as it took a turn not far from Dealey Plaza, where John F. Kennedy was assassinated in 1963. The Kawasaki 1000 Police Special motorcycle that he was riding apparently hit a concrete abutment; it was estimated that the officer was thrown about 20 yards by the impact.

The motor officer was rushed to nearby Methodist Medical Center where he was pronounced dead. Dallas police said Lozada-Tirado has been a member of the department since December of 1988. He had been assigned to the Traffic division since 2003 and was also well-known in the East Dallas community for his work at a storefront station on Hall Street. Cpl. Lozada-Tirado had been with the department's motorcycle unit for a little over a month and this was his second assignment; he also was part of the motorcade for Senator Barack Obama when he brought his campaign to Dallas earlier this week.

Cpl. Lozada-Tirado is the third motorcycle officer to die as a result of injuries sustained during a motorcade. On August 28th, an officer from Rio Rancho, New Mexico died when his motorcycle crashed as a Presidential motorcade approached the airport in Albuquerque. The officer, Germaine Casey, was 40. He was the lead motorcycle in the motorcade when the crash occurred. On November 23, 2006, Honolulu Police Officer Steve Favella, age 30, crashed on wet roads during President Bush’s motorcade in Hawaii. Officer Favella died of his injuries a week later. Two other officers injured in the crash were released from the hospital.

Please keep the family, friends, and colleagues of both of these fine officers in your thoughts and prayers.
Posted by Linda at 2/24/2008