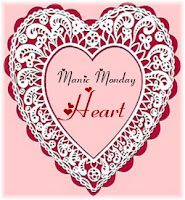 Morgen's Manic Monday this week gave us the word heart so let's see where mine takes us, shall we?

"Love is a many splendord thing, Love lifts us up where we belong, All you need is Love."
- Christian to Satine in Moulin Rouge
Way back in the dark ages, when I was a kid, I used to think that a person couldn't really have a broken heart because your heart wasn't what you loved someone with - you loved someone with your head. I was a firm believer in all emotions originating and residing in a person's brain and not any other part of one's body and that's all there was to it. For someone who had never had their heart broken, it made perfect sense.

"Nothing takes the taste out of peanut butter quite like unrequited love."
- Charlie Brown
In my teenage years I went through your standard angsty heartbreak episodes a couple of times but even though I thought that every song that told of a broken heart was written just for me and I was going to die several times over, I obviously survived to fall in love another day.

"Sadness flies on the wings of the morning and out of the heart of darkness comes the light."
- Jean Giraudoux
When my first marriage broke up, I got to experience firsthand the first inkling of a real honest-to-goodness broken heart as I was quite devastated when my husband told me that "there were too many single women out there" for him to be a husband and father. Ouch. Still, I had gotten married at the ridiculously young age of 19 and when he left myself and our 6-month old son to go out in search of a good number of those single women I was only 23 and still had the resilience of youth. It took awhile to get over the rejection and hurt but I managed to and became a better person for the experience - or at least so I'd like to think!

"The greatest thing you'll ever learn is just to love and be loved in return."
- Christian, Moulin Rouge
A few other relationships came and went before I met "the one" - the guy I could have happily spent the entirety of my life with, the guy who was my other half, the guy who finished my sentences or me his, the Yin to my Yang, the one person who completed me. People talk of soul mates and I'm sure that for me, he was/is.

"You complete me."
- Jerry to Dorothy in Jerry Maguire
When I fell in love with him it was with more than just my brain - it was with every single fiber of my being, every single nerve ending in my body, every single bit of my mind, my soul, and my heart. There was not a single part of me that this man did not touch and I finally understood what all of the brouhaha was about when it came to love and going to the ends of the earth and back or giving everything you had for that one special person. It was the most intense feeling I've ever felt second only to the even more intense feeling when the heart that I had given to this man was handed back to me in tiny little pieces.

"I don't know why they call it heartbreak. It feels like every other part of my body is broken too."
- Missy Altijd
My love for this man had taken me from the highest of highs to the lowest of lows and the pain was incredible. The pain touched every single fiber of my being, every single nerve ending in my body, every single bit of my mind, my soul, and my heart. While my mind cried out in anguish, my chest hurt from the very real pain of what I knew was my heart breaking as I can still remember standing there with my hand pressed to my chest while it hurt - it physically hurt.
"Now I know I have a heart, because it's breaking."
- The Tin Woodsman, The Wizard of Oz 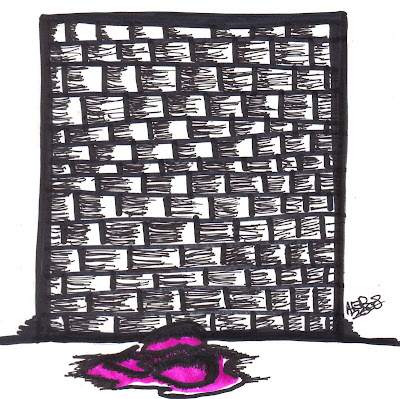 My heart didn't just crack as it had in the past, it broke wide open and I wasn't sure if I was ever going to be able to put it back together again much like all the King's horsemen and all the King's men must have felt when looking at Humpty Dumpty smashed in pieces all over the ground. I was a devastated mess but eventually I was able to pull myself back together and go on with my life. Until I gave my patched-together heart back to the same man - two more times.

"If a man should importune me to give a reason why I loved him, I find it could no otherwise be expressed, than by making answer: because it was he, because it was I."
- Michel de Montaigne
The second time was less than a year after the first - the third time was 16 years after that. Time may, in fact, heal all wounds but when you allow the scar to be ripped open again even 17 years later it hurts just as bad, if not worse, than the first time. Each time it happened I can remember holding my hand to my chest and wondering how it was that the pain could be centered there instead of in my head when love was an emotion and not a tangible, physical thing that one could touch.

"They say that time heals all wounds but all it's done so far is give me more time to think about how much I miss you."
- Ezbeth Wilder
"But why?", you might ask. "Why put yourself through that kind of pain not once or twice but three times?" I've asked myself that very same question many times and what comes to mind is a line from the poem An Essay On Man written by Alexander Pope in 1733 where he writes, "Hope springs eternal in the human breast ..." combined with a simple statement once made by Woody Allen, "The heart wants what the heart wants."
"I would rather have had one breath of her hair, one kiss from her mouth, one touch of her hand, than eternity without it. One."
- Seth speaking of Maggie in City of Angels
Sad but true and I shamefully admit that I would put my heart through that particular wringer yet again if the opportunity ever presented itself in this lifetime. Now, before you call me every manner of fool consider this - Have you ever loved someone so much it made you cry? Have you ever loved someone so much you can't get him or her out of your head no matter the time passed or distance apart? Have you ever loved someone so much that your life feels incomplete without them?

"Where you used to be, there is a hole in the world, which I find myself constantly walking around in the daytime, and falling in at night. I miss you like hell."
- Edna St. Vincent Millay
We put ourselves through a lot of self-tortures during the course of our lives and love and heartbreak are probably two of the biggest but even with the pain, it is so worth it. Yes, I have been hurt badly but I have also felt the most incredible happiness ever by loving this one person and I'd like to think that the happiness still outweighs the sadness. God willing maybe someday the obstacles that keep us apart will no longer be there but even if that never happens I have the memories and I will never lose those.
" What the heart has once owned and had, it shall never lose."
- Henry Ward Beecher
If you're lucky enough to be with the love of your life - tell him or her so. If you aren't - why not? What's holding you back? Life is too short. Don't waste it.

"You never lose by loving. You always lose by holding back."
- Barbara DeAngelis