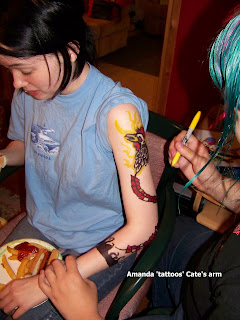 With the big Mindless Self Indulgence concert coming up in New York City, there has been a lot of preparation going on around here between Amanda, Darci, and Cate because - heaven forbid - they just put on a pair of jeans and a t-shirt to wear to the concert. Nope - they have to have costumes complete with drawn on tattoos, make-up, and - of course - hair. Frankly, the whole thing has worn me down but that's probably because I'm old and never even went to a concert until I was over 18 and I certainly never went to one that inspired me to dress up like the band members. If the excitement of these three teenage girls could somehow be harnessed and used for energy, I wouldn't have to worry about an electric bill for a very long time!

Yesterday and today turned out to be the major prep days for the concert as yesterday was when my friend and trusted hair stylist Trisha was coming over armed with bleach, hair clips, scissors, and a couple tubes of hair color that will never see a shaft of hair on my head thank you very much! Trisha will happily bleach Amanda's hair for me but when it comes to applying her choice of outrageous colors she lets me take over as "it's just too messy". Gee, thanks, Trish!

As you might recall, Amanda's had blue hair for quite some time now and wanted to change it to pink and green in order to match the jacket that we had made as part of her costume for the concert. The first trick was to get her hair bleached out so that we'd have a clean slate to work with when it came to the new colors but there was a bit of trepidation as to whether or not Trish would be able to get all of the color out. After a fashion she was able to get most of it and that left me with a blonde for a night as we needed to let Amanda's hair rest for a bit before putting it through the rigors of coloring.

In the meantime, Darci had talked her mother into letting her have a couple of pink chunks in her hair so Trisha bleached out two spots on the top front of her hair and two spots in the back so that when she puts her hair up in ponytails as part of her costume, the color chunks are in the right places. This was Darci's first ever foray into bleach and color so she was quite excited and in the end, her pink chunks came out very pink but very nice! Hopefully her mother will approve but if not ... uhm ... yeah, give it time and it'll fade out!

Fast forward to earlier this evening and my adventures with applying color to Amanda's hair. The pink side went on quite easily and was definitely the right shade but we ran into problems with the green hair dye as once we got it on part of her hair, it became quite evident that it wasn't really what one could call green at all but more like a dark aquamarine or teal. Amanda had her heart set on green so was pretty disappointed with the color but she eventually came around and decided that she was just going to have to deal with it. I really do wish that the green dye had actually been green as it would have matched her jacket better but in the end I'm sure it will be okay. Not perfect but okay. I think a letter to the manufacturer is going to be in order, though, as the tube is clearly marked 'green' and it was definitely not green.

Being that you weren't here to share in the "fun" I have put together a little slideshow for you to enjoy a shortened version of the whole process (a small pun intended for those who know hairdressing terminology!) ...


Now if you'll excuse me, I'm feeling somewhat harried (no pun intended there at all!) and there's still a ton of stuff to do before we leave for New York City in the morning and our great adventure. Myself, Amy, and three teenage girls take on The Big Apple ... this should be interesting! Especially considering I'm not wearing a costume to this concert and have no clue what to wear. Whatever it is, I'm sure I'm going to be quite blah compared to at least three teenagers I know!
Posted by Linda at 6/26/2008