Tapas, Tombstones, and Trains - Oh My!

Even though yesterdays' weather wasn't New England at its finest, I was holding firm to the adage that an overcast or even rainy day in Boston was infinitely better than a sunny day in dispatch and that proved to be correct as I had a great time visiting blogging buddy (and real life friend) Mags in her new home this weekend. 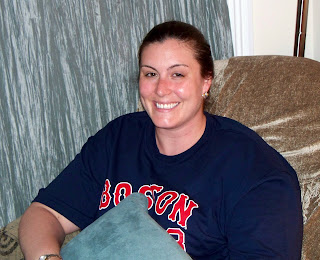 When I first met Mags she was still living here in Connecticut but after graduating from culinary school she decided to pursue a dream of hers, sold her house, and moved to Boston to live the life of a brave young woman in a big city. I teased her a bit about being our own real life Mary Tyler Moore and that she was only in need of a beret to toss in the air to make the picture complete but I have to say that I totally admire her greatly for having had the guts and determination to do such a thing. I also envy her greatly as it's such an adventure and something I would love to have done if my life had taken a different direction.

Anyhow, even if I can't live in a big city with all of the excitement that it has to offer, I can certainly go up and visit Mags, right? Right! To that end I climbed on board an Amtrak train in New London Friday afternoon and made the slightly less than 2 hour trip north. I had planned on making this trip completely on my own but much to my surprise while I was sitting on a bench outside of the Amtrak station waiting for the train to arrive, who should walk up but one of the EMTs I work with at American? Not just any EMT either, mind you, but one that I've mentioned in my posts before as being extremely cute - this one in the middle of this gang of guys.

Well, I certainly wasn't going to turn down an attractive travel partner just so I could listen to my iPod so we made the trip to Boston together. It was a great chance for me to get to know JM a bit better and find out why he went into EMS to begin with as well as some other things I'm not going to find out in a work environment. JM is always "on" at work and it was nice to talk to him when he wasn't in a constant joking mode. Besides that, it gave people at work something to gossip about as I couldn't help but call dispatch from the train and hand the phone to JM to tell them 'hi'! I know, I know ... I'm bad but what can I say?

Upon arriving at South Station we went our separate ways as JM went off in search of his friends and I continued on to Mags' apartment via the Red Line to the Green Line. I've only been to Boston a couple of times but I have always been impressed with their public transportation system and find it extremely easy to get around without getting at all lost. I don't mind feeling like a tourist but I'd rather not feel like a lost tourist, thank you very much! 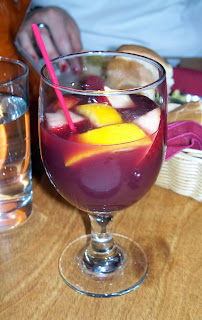 When I got to Mags' part of the city she was sitting outside of her apartment building waiting for me and after a big welcome hug I got to see her new home on the 5th floor that has a very nice view of Boston itself from her living room window. For dinner, Mags had made reservations for us at a Tapas restaurant and I was really looking forward to trying something different. Tapas are a Spanish cuisine which are basically small appetizer-size servings of all sorts of different dishes. Because the dishes are small, you can order three or four of them and be able to try a variety of things rather than just one main meal. I had never tried Tapas before but they sounded delicious so we took off in the direction of the restaurant which was almost at the top of a rather high hill. By the time we reached the restaurant I was more than ready for the Sangria we were planning on ordering - or at least a big glass of water!

Dinner was absolutely delicious as I tried a Tortilla española (a traditional Spanish potato and onion omelette), Costillas de ternera (slow oven braised boneless beef short ribs over scallion mashed potato), along with Pollo curruscante del ajo (crispy garlic chicken) - all of which were fantastic! Mags ordered Gambas al ajillo, (sizzling shrimp in garlic), Albóndigas (homemade tenderloin meatballs in green peppercorn sauce), Empanadillas de queso de cabra (herbed goat cheese empanadas served on a roasted red pepper relish), and Bocaditos de tomate, queso manchego y anchoa (garlic toasted bread with tomato, anchovy, and Manchego cheese). Even though these were all small servings we were pretty full by the end of dinner and decided a walk to Brookline for dessert might be in order.

After stopping and changing my shoes (I will never get the whole proper walking shoes in a city thing right!), we hit the streets for a walking tour of the neighborhood of John F. Kennedy's birthplace. Brookline is, as they say in Boston, wicked awesome and I loved all the little shops that we passed along the way. The side streets were lined with very nice residences and homes that had probably been in families from one generation to another throughout many, many years. We stopped at JP Licks for ice cream and then walked back to Mags' where I had absolutely no problem falling asleep on her extremely comfortable couch! 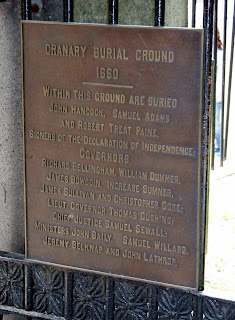 Saturday was calling for a chance of showers but I was thinking positive as we headed out on the T towards the Boston Common and our day in the city. Being the history nut that I am, I wanted to drag Mags around to a couple of the local historical hot spots that she said she hadn't seen since moving to Boston. For some unknown reason I always think that because I enjoy history and learning about our country from its inception, other people will too so I sure hope that Mags wasn't bored to tears as we walked through the Granary Burial Ground, which is the 3rd oldest cemetery in Boston, as well as Kings Chapel Burying Ground which is also part of the Freedom Trail and Boston's oldest cemetery. 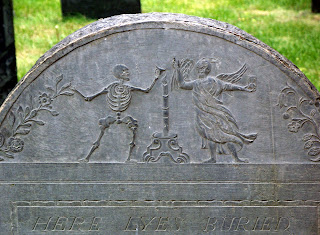 The Granary Burial Ground is the final resting place of such historical notables as Paul Revere, Samuel Adams, John Hancock, and the parents of Benjamin Franklin - who was born in Boston even though he's best associated with Philadelphia. At King's Chapel Burial Ground one can find the graves of John Winthrop, the first governor of Massachusetts, as well as Mary Chilton, who was the first woman to step off the Mayflower. Most interesting though is the gravestone of Joseph Tapping which depicts a skeleton and Father Time battling over death. Having not spent a lot of time in old cemeteries, Mags thought that a lot of the gravestones with their depictions of leering skeleton heads and the like were pretty creepy and I can't say that I blame her. People were just a lot more superstitious about death back in the 1700's and it showed on a lot of their tombstones.

After touring King's Chapel, which was built in 1754 and holds Sunday services to this date, we continued on towards Faneuil Hall and Quincy Market as the skies above us started to cloud up even more. We had a lovely lunch at The Purple Shamrock, an Irish pub with windows that open onto the street so you can watch the city as you enjoy your lunch. From there we continued on to Haymarket and the produce sellers that hawk their wares every Friday and Saturday. Mags picked up a few things for dinner and then we made a quick stop by the North End and Mike's for a cannolli to take back for dessert. At that point, the umbrellas that Mags insisted we take with us came into good use as the skies above us opened up and the 80% chance of rain the forecasters had predicted turned into 100%!

Back at Mags' apartment we spent the rest of the afternoon chatting and watching silly shows on MTV. Mags made a delicious dinner of pork chops topped with a delicious pineapple and cilantro salsa, mashed potatoes, and zucchini. She didn't go to culinary school for nothing and her skills in a kitchen are nothing short of amazing! I had learned this the first time when Mo and I visited her last September but it was certainly nice to have a tasty reminder of her talents with food! Had I done nothing else in Boston all weekend except eaten that dinner, it would have been more than worth it!

At the end of the evening I caught the Green Line back to the Red Line back to South Station and my awaiting Amtrak train to make the trip back to Connecticut and home. Not having any adorable company sitting next to me that time I spent the trip listening to my iPod and thinking about my next visit to Boston. I told Mags that perhaps I'd bring Amanda with me the next time and we'd take a Duck Tour as well as eat in one of the many cute little Italian restaurants in the North End.

Thank you again, Mags, for your hospitality and allowing me to drag you through the burial grounds of Boston! Next time we'll keep our fingers crossed for only a 20% chance of rain rather than the other way around!


Oh, and Mags - as to why people place stones on top of the graves, the best I could find is this - No one's entirely certain of the origin of the tradition, but most people believe that the tradition is borne out of the desire to mark your visit somehow -- to let the world know, "Someone was here. This person is not forgotten." If anyone knows where and or why this tradition started I'd love to know as there were plenty of stones left on top of the gravestones we visited!
Posted by Linda at 6/01/2008