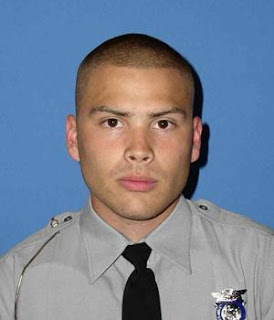 Another young law enforcement officer was killed this week when he was shot during the course of a traffic stop on Interstate 40 in western North Carolina. The shooting occurred on Tuesday, June 17th after North Carolina Highway Patrol Trooper David Shawn Blanton, Jr. pulled over a motor vehicle at approximately 10:20 pm. An argument ensued and the suspect, who is now in custody, struck Trooper Blanton with two shots, one that was not life-threatening and the other entering his torso in an area not protected by his bulletproof vest. That shot struck vital organs inside his body and proved fatal shortly after the trooper had been transported to Mission Hospitals in Asheville.

"Incidents like this remind us of what a dangerous profession law enforcement is," said Brian E. Beatty, Secretary of Crime Control and Public Safety in North Carolina in a news release.

Trooper Blanton was from Cherokee, N.C., and a member of the eastern band of the Cherokee Indian tribe. He was the first of that tribe to serve with the Highway Patrol according to his father, David Blanton Sr.

The elder Blanton said his son had recently married and had one child, who had been born premature on May 31st. The baby boy, Brendan Tye, had medical issues when he was born and was still being treated at the same hospital in Asheville where his father died Tuesday night. Trooper Blanton's wife issued a brief statement through the hospital and talked about their newborn son who is listed in serious condition, "We sincerely appreciate all of the prayers for our family and especially for our son Tye," Michaela Blanton said.

Please join me in thanking this brave young man for his service and in sending prayers to his family, especially to his infant son.
Posted by Linda at 6/18/2008