Portraits from the Past

casualties of a divorce, in addition to the really obvious ones, can be pictures of your family. In my own divorce back in 2002, that was most definitely the case as the ex-husband got custody of the vast majority of the professional portraits that we had taken of the kids when they were younger. Chances are good I have some of them stashed somewhere around the house but, old and addle-brained that I am, I'm not exactly sure where they might be hiding. No doubt I'll come across them someday but for now it was a treat to find some of them while I was up at my mother's house this past weekend.

Those of you who are regular readers of my blog have seen quite a few pictures of Amanda, my oldest daughter, but I guarantee you that she looks nothing like the pictures of this little girl in these pictures. Of course I'm a bit prejudiced, but wasn't she just adorable?

The first picture above was taken when Amanda was a little over two years old, the one to the right was at age three, and the third one was taken when she was in third grade at Veterans School here in Norwich.

Time goes by so quickly that it's way too easy to forget what your children used to look like, especially when the child in question has taken to coloring their hair every shade except normal and, rather than a big smile, what you get most of the time is a surly teenage sneer. Sigh ... It's a good thing I found these pictures to help me remember!

Speaking of teenagers, Amanda isn't the only that I can lay cla

im to as Jamie is most definitely in the same category when it comes to her age - though certainly not her hair! This first picture of Jamie was when she was only about 4 months old. The quilt that she's posing on was one that I actually made myself for my son before he was born so it's circa 1981 and the only quilt that I ever attempted to make in my life. Each child used it as a baby and now it's stored away in a box in the basement. Now that I think about it, I should have given it to my son for my grandson to use - d'oh! 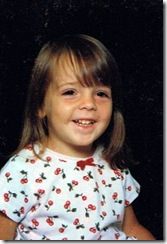 This second picture of Jamie was taken when she was two years old, very close to the same age that Amanda was in the first picture of her above. As you can see, at that time I had one blonde daughter and one brunette daughter but both were real cuties - at least in my own non-prejudiced opinion! Oh wait, I'm a mom, is there really such a thing when it comes to your own kids? Probably not!

Another picture that I found on Friday is this one of Jamie wearing a blue sunflower dress that I just loved. Amanda had a matching red one and they

both looked so girly and cute when they posed for these pictures. If you look closely, you can see that Jamie has that devil-may-care gleam in her eye and even though she no longer has that dress, she certainly has that look! She was always my "spit in their eye" child while Amanda was more of the quiet child. The girls are only 13 months apart in age but miles apart in personality - they always have been and probably always will be. Sometimes I find it hard to believe that these two individuals have the same parents but trust me, they do!

Last but certainly not least is a picture that I had completely and totally forgotten was ever taken but I'm so glad that I have again. This Christmas picture was taken in 1993 when Michael was 12, Amanda was 1-1/2, and Jamie wasn't quite 6 months old. A redhead, a blonde, and a brunette and yet all three of them are mine. Quite the assortment, isn't it?

When your kids drive you crazy, as mine sometimes do, it's easy to forget what a gift they truly are but this last picture helps me to remember - at least for a few minutes - until they do something to drive me nuts yet again! Or is that more like a short putt??