Happy 35th Anniversary to the Company I Work For!

********************
As I mentioned in yesterday's Photo Hunt post, American Ambulance Services, Inc. celebrated its 35th anniversary on Friday evening with a party under the tent at the American Wharf Marina. Today, however, marks the official date of that anniversary.

On June 24th, 1972 Ron Aliano, CEO of The American Group, started his ambulance service in Norwich with just two ambulances that operated out of the back of a service station. If you want to know what it was like, it has been suggested that one watch the 1978 movie "Mother, Juggs, and Speed" as that will give you a pretty good idea of what early ambulance service was like. Personally, having seen it, I find that to be a little bit scary and I'm glad I never needed an ambulance back in the 70's!

In 1986, American moved into its new headquarters at One American Way and those original two ambulances have definitely multiplied over the years. Now their are over 50 vehicles in the fleet including both ambulance and chair car vans as well as over 200 employees consisting of Emergency Medical Technicians, Paramedics, Chair Car Van Drivers, Schedulers, Dispatchers, and Office staff. 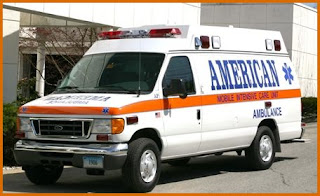 I joined American on June 3rd, 2003 after breaking my vow to never dispatch again - yeah, that worked out real well, didn't it? - and though there are times when I want to do nothing more than beat my head against the counter on which my keyboard rests in sheer frustration, I have never regretted taking the job. I have met some of the nicest people at AASI that can be found anywhere on the face of the earth and they have made a sometimes over-the-top stressful job more than tolerable.

They're so good, in fact, that I was awarded Employee of the Year in 2004 and I have never once forgotten that it was only through them that I was able to achieve that honor. I've always believed that a dispatcher is only as good as those people he or she dispatches and I can honestly say that the road crews I work with are some of the best anywhere. I appreciate every single one of them even though I probably neglect to tell them that as often as I should.

In a post awhile back I mentioned that as a police dispatcher I worried about the men and women who were "under my care" and Bulldog, a favortite EMT and regular reader of this blog, asked me the following question:

"... how do you feel now that you dispatch EMT's & Paramedics as opposed to cops? Is your "worry level" higher or lower because of the difference in actual job specifics? Not trying to put you on the spot ... just curious!"

Up until now I hadn't had a chance to address that question but I have been giving it a lot of thought ever since it was asked. My level of worry now depends on the type of call that I'm sending a crew out on. If it's just a routine transfer or even a lights-and-siren transfer from one facility to another, my worry is mainly one of road safety. Just because there's a large white and orange ambulance possibly with lights flashing and siren wailing doesn't mean that people will always notice said vehicle and I worry that a crew is going to get t-boned, hit head-on, or even have a tree jump out at them (ah yes, Titan and the tree - I remember it well ...). Accidents are a constant source of concern.

As for other worries, I don't fret quite as much as I did when dispatching police officers as EMS is normally looked on as "the good guys" but that doesn't mean that something can't go wrong on what may appear to be a routine call, especially when it comes to psych transports. I learned to worry about "my guys" as a police dispatcher and even though I haven't done that particular job in years, I carried that over with me and I still worry about "my guys" - just now on a slightly different level. Hope that answers that for you, Bulldog, without being too vague!

Unless something in my life changes drastically (like finding that elusive winning lottery ticket or having Prince Charming sweep me off my feet and cart me off to his castle) I'm pretty sure I'll still be at American when its 40th anniversary rolls around five years down the road. I'm sure that's going to be quite the party, too! In the meantime, Happy 35th and - as always - "safe trip and 110 upon turnover"! 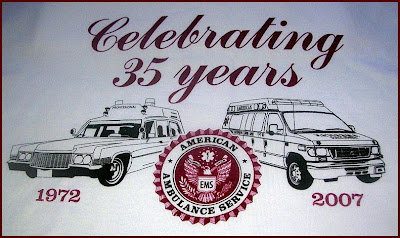