♥ ♥ ♥ ♥ ♥ ♥ ♥ ♥ ♥ ♥
Last weekend my son, Michael, made the trip from Rhode Island to Connecticut (a good stone's throw if you're any good at throwing stones!) to put in my air-conditioners for me. Having a bad back, I know it's paramount that I don't do it myself so it's a good idea to either rely on the kindness of someone with a strong back at work or call in the Prodigal Son. Considering that the Prodigal Son also had a second guitar peripheral for Guitar Hero II that he wasn't using that I wanted to borrow it made for the perfect "kill two birds with one stone" situation. Hmm, perhaps it was the same stone that was thrown over from Rhode Island?? Well, either way, I digress.

While Mike was here he asked me why it was that my blog always referred to my having two daughters but there never seemed to be any mention of a son. Granted, I have made mention of he and his wife in past posts but he's right, I haven't really mentioned him much at all recently and with my template and pictures, etc. it would be very easy for one to say "what? you have a son? I had no idea!" I hope to rectify that error of omission with this post! 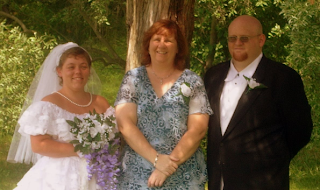 Tomorrow, July 1st, marks the very first wedding anniversary of Michael and his bride, Laura. If I remember correctly, it was an awfully hot summer day in Rhode Island but the humidity wasn't bad so that was a real plus!

Mike & Laura's wedding was only the second wedding I have been to in Rhode Island and it wasn't all that far from the first wedding I attended there which was that of Mr. & Mrs. Bulldog, a regular commenter on this blog. I have to say that both were very special occasions and, despite the fact that I have stated that I don't dance, I reluctantly admit that I danced at both weddings. I had actually completely forgotten that I danced at Mike's wedding until Jamie reminded me of it recently just as Bulldog reminded me that I danced at his. I'll chalk it up to old age that I had forgotten both occasions - well, either that or I really, really, really wanted to forget them and was hoping that everyone else had also! Sadly, that is apparently not the case! 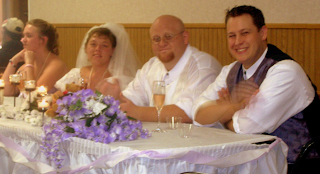 Anyway, all talk of dancing aside, I find it rather hard to believe that it has already been a year since my son who proclaimed that he was never going to get married proved himself wrong. As my cousin Amy likes to say, don't ever say you're never going to do something because as soon as you do, you're going to end up doing it (that and "only idiots buy soundtracks", right cuz??).

If Mike had chosen to never get married based on his mother's track record, I could certainly understand that. I haven't exactly been a shining example of wedded bliss having tried and failed twice at the "till death do us part" thing. However, where I have been less than a beacon of light when it comes to matrimonial success, my parents' marriage was a perfect example and two of my brothers seem to be doing pretty well with it, too. I hope that Michael emulates them and not myself or his father - another not so shining example though at least he had the good sense to have only tried marriage once! 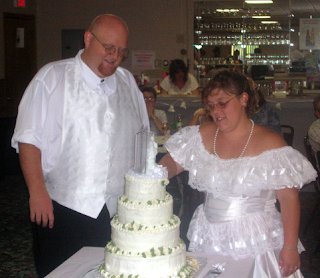 To Mike and Laura - I wish you many more years of happiness as well as a successful partnership as I think that's really what makes for a good marriage. It's not easy to put your own needs aside and take into account those of your partner and children but many, many people (other than myself) have proven that it can be done. Happy Anniversary!!

Oh, and for those who didn't realize that in addition to having a son and a daughter-in-law I also have a grandson, may I present to you Mathew Kendall? This isn't a recent picture but that's because my son who owns a digital camera never sends me any new ones! Hint, hint! 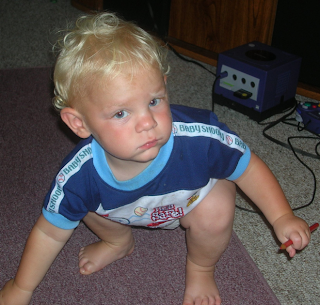