********************
My schedule at work right now is at best hectic and at worst crazy (another 48 hours packed into four days) and with Jamie coming out tomorrow for the summer, I've been trying to get things rearranged and straightened out at the house. Translated that means moving some of Amanda's stuff to make room for Jamie's stuff! Needless to say, I haven't had a whole lot of free time so I am "cheating" a bit on today's post by pulling one from the archives of my LiveJournal blog.

This post was originally written on June 15th of last year and what made me think of it was a post this past Saturday at Captain Picard's Journal. For his 100th Weekend Question post he asked a very similar question, which he had originally used as his very 1st Weekend Question. Thanks Jean-Luc for the inspiration!

"... Recently I interviewed for an open position within my company as The Scheduling Coordinator. I knew I had a snowball's chance in hell of getting the spot but figured it was worth a shot and it gave me a chance to dust off my interviewing skills - such as they are. One of the more interesting questions of the interview was "if you could pick three people to have dinner with - dead or alive - who would they be and why?" Interesting question. My three choices were my father so that I could thank him for all of the things I never got a chance to while he was still alive and to see if, in his opinion, he thought I might have made it over fool's hill yet; Abraham Lincoln because he was President during a time of extreme conflict and stress and yet he managed to maintain his sense of humor throughout it all; and Ulysses Grant because even though he wasn't the best President this country ever had he was a brilliant strategist during the Civil War and was the one to really make a difference when it came to the Northern States keeping the Union intact. 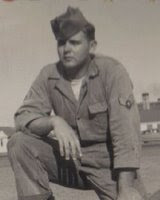 General Ulysses S. Grant
If I could invite a fourth then I would also ask Robert E. Lee to stop in and dine with us as I can only imagine the conversations that we could have over that dinner table! My Dad was a bit of a Civil War buff and to have the chance to sit down with three of the most prominent people of that time would be truly amazing! I can just picture the salt and pepper shakers and other dining implements being arranged around the table to depict military encounters!

General Robert E. Lee
Andrew had an interview today for a Supervisor's position and he told me that he had the same question asked of him. It really is an interesting thing to think about - especially when it's asked to you in a situation where you don't have a lot of time to think about it. I wonder who came up with the question and what the significance of one's answers might be?"

How about you, gentle readers? What three people, dead or alive, would you invite to dinner and why?
Posted by Linda at 6/05/2007