A Bit of Logical Thinking, I Think! 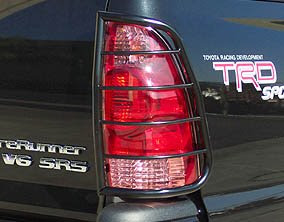 I was looking at automotive accessories on the internet earlier today for something in particular and I came across tail light guards, which at first I wasn't exactly sure what the purpose of was. It wasn't that I was being dense or anything but I was wondering why on earth people would need such a thing on their cars. Was there that much of a problem with people backing up their vehicles and smashing their tail lights out? Why would anyone invent such a thing?

I took a closer look at the product description out of curiosity and think I may have found the answer "...Tail light Guards feature European styling and high quality one-piece construction." Obviously if they have European styling it must mean that the people in Europe were the ones to initially have the problems with backing up and breaking out their tail lights and they came up with the idea! It naturally migrated across to America and, because we love all things European, people now put them on their vehicles in order to look cool like our counterparts across the ocean!