Connecticut Police Officer Dies in the Line of Duty 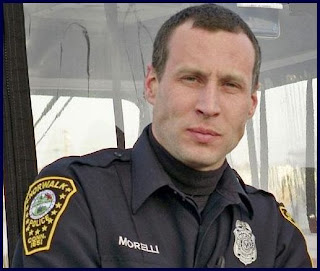 At 12:26 a.m. today, Officer Morelli contacted dispatch to advise them that he was exiting his car in South Norwalk to investigate suspicious activity in a rear parking lot. He contacted dispatch a second time and then nothing more was heard so back-up was immediately sent to the area. When officers arrived on-scene they found Officer Morelli next to his cruiser where he had been shot once in the head with an AK-47 which was found at the scene. Police believe that Officer Morelli may also have fired one shot from his service gun but there is no evidence that he hit anyone. Witnesses reported hearing a car leave the area at high speed, shortly before more Norwalk police officers arrived on the scene.

"He was patrolling the area, and in fact noticed suspicious activity, and stepped out to investigate what was happening," said Norwalk Police Lt. Paul Resnick. He was working alone and died at the scene. No arrests have been made.

In a statement released this afternoon, Connecticut Sen. Joe Lieberman said he was "saddened" by Morelli's death. "I hope the perpetrator of this horrible act is quickly apprehended and punished."

Officer Morelli, a decorated veteran of the United States Marine Corps where he served as an intelligence analyst, was a member of the Norwalk Police Department for 11 years. He is survived by a young daughter.

I echo Senator Liberman's sentiments and hope and pray that whoever committed this cowardly act of violence against a man who was simply doing his job is found, arrested, and convicted to the furthest extent of the law. My heart goes out to Officer Morelli's family and all of the members of the Norwalk Police Department.
Posted by Linda at 3/21/2008