This Nearly Was Mine ...

... or perhaps I should title this post "The Agony of Defeat"? Either way it's about loss and how that loss sticks with you even a day or two later. No, I'm not talking about love lost this time around, I'm talking about how $2,000 was snatched away from me last night at Bingo just as I was about to claim victory and at long last break my losing streak. My luck sucks ... 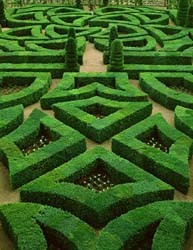 Normally when I go to Bingo with my mom and my aunt at the high stakes parlor at Foxwoods Resort & Casino, I don't ever come close to being able to yell out Bingo! Of course now that I think about it I wonder why they call it a resort as there's not a whole lot else to do there other than gamble unless you can sell your youngest child to afford the green fees at their Lake of Isles golf course but I digress ... back to last night ... Generally when I go to Bingo my cards aren't even in the game and the ink blots I make on them look more like scatter-shot rather than making up whatever pattern the game happens to be looking for. If it's a double postage stamp we're playing for I'll end up having postage due on every single card in front of me; if it's a picnic table pattern then my table is sorely lacking legs or a top; my wild pyramids look more like the garden mazes from the Court of Louis XIV; and I'd be better off drinking a six-pack rather than trying to form one on my card! When it comes to Bingo, I am a talentless - and luckless - hack but hope springs eternal and I always figure that my luck has got to change at some point, doesn't it??

Last night, though, my cards were actually playing quite well and I was in the game for once. I came close on just about every single cover-card "Quickie" (a misnomer if ever those was one as the caller is still about as slow as molasses on a winter day despite the fact they tout it as a "game for the advanced Bingo player") and I was "waiting" on several other games. In the world of Bingo "waiting" means that you only need a number or two to be able to yell out that one word that is valued above all others in a Bingo Hall. "Waiting" means you stand a chance, "not waiting" means you might as well file your nails while your cards sit there and mock you. 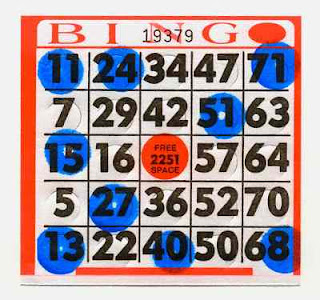 As I said, my cards were playing quite well last night and I was actually feeling pretty optimistic that I was finally going to be able to yell Bingo! after the long dry-spell that I've had since 1981 when I last yelled it out in the NCO Club at McGuire Air Force Base in New Jersey and came home with $40 (which was a lot of money back then!). Things were most definitely looking good especially when it came to one of the big payout full-card cover-all games towards the end of the night. It was a progressive game where players first started out looking for a letter "X" and a letter "L" and then continued on for the full-card cover-all. If you can cover your card in 48 numbers or less the prize is $10,000 (my father actually won this game years ago and came home with the $10,000 - the biggest prize he ever won) but if no one covers the card in 48 numbers or less we then play on for a full-card cover-all consolation prize of $2,000. Not bad ... I could use $2,000 ...

On my sheet of nine cards I had several cards that were playing quite well but the letter "X" and then the letter "L" portions of the game were closed without my having completed either letter. That's okay because those portions of the game were only paying out $300 and I was going for the whole enchilada. No sense "wasting my win" on a smaller amount. The caller continued on and the card in the very middle of my sheet was playing very, very well. I only needed the numbers 1, 11, and 21 to cinch the thing and walk out of there with some of Foxwoods' money in my pocket.

"B-1". Yes! Only two numbers away -things were looking really good. "B-11" popped up on the TV monitors around the room and my pulse started to race a bit. In my mind I was thinking, "Come on I-21, you can do it!" However, my hopes were dashed as B-11 was called out (you can't just have the number displayed on the screen in order to win, it actually has to be called) and I heard someone else yell out Bingo!. What made it even worse was that the very number I needed - I-21 - was displayed on the TV monitors and would have been the very next number called if no one had called out Bingo! I couldn't even hope that whoever had called out was in error because he or she was playing on a video terminal and it's kind of hard to mess up when the %&*#'ing machine is doing all the work for you.

AUGH!!! I wanted to pound my head on the table or burst into tears as someone else made off with the $2,000 that was supposed to be mine. Why, oh why, do the Bingo Gods continue to mock me?? I managed to maintain my composure but it truly was the agony of defeat.

Even though it has absolutely nothing to do with losing at Bingo, the song "This Nearly Was Mine" from the Rodgers & Hammerstein musical South Pacific began playing in my head as I was driving home last night. Knowing that Jamie from Duward Discussion loves a good musical number, I decided to post it here along with this sad tale of loss! This particular version features the great, late Robert Goulet who I had the pleasure of seeing live in several plays, including this one, and who will always remain one of the greatest singers ever for me.