The Return of Rachel Lutzker

After months of waiting for a glimpse of their favorite traffic reporter, Connecticut residents were finally able to watch Rachel Lutzker back in action yesterday morning when the brand-spanking new Fox 61 Morning Show debuted at 6:00 a.m. Along with Rachel Lutzker in front of the brilliant, high-definition 3D traffic maps that show real-time traffic flow, speeds, incidents, and travel times on major roadways throughout the region, the broadcast features Logan Byrnes and Rebecca Stewart as co-anchors with long-time Connecticut weather icon Joe Furey keeping viewers apprised of what's going on outside their doors with Weather on the 6's.

I recorded the show for the first two days so that I could check it out and see if the show was going to hold a candle to the current morning shows that are running on Channels 3, 8 and 30 but I might have to watch a few more to see how it develops over time. For right now, in my own humble and honest opinion, it seemed like there was just something missing or that maybe the team was trying just a little too hard. Maybe I've watched Scott Haney on Channel 3 for too long or something but the show just felt a little flat to me. That's not to say that I don't find Scott Haney a little over the top sometimes because, trust me, I do!

Logan Brynes had bags under his eyes the size of small American Tourister cases so perhaps he needs to go to bed a little ealier at night while Rebecca Stewart is just a little too perky for my liking; I much prefer Keisha Grant over on NBC 30. Even though Joe Furey probably knows more about weather than just about any of them out there, my choice would still be Bob Maxon also on Channel 30. As for Rachel, who obviously was sorely missed from the Channel 3 line-up, it seems like business as usual in front of the traffic screen. She's most definitely better than Teresa LaBarbera, who now banters back and forth with Scott over on Channel 3, though Teresa seems to be starting to feel more comfortable in her traffic reporter role as time goes on. 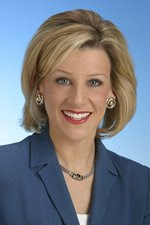 I'm not exactly sure Connecticut really needed another morning news program but at least you can say that we've got a lot of diversity here in the Nutmeg State! Fox 61 did a great job of rounding up familiar faces & voices - Logan Byrnes has been broadcasting news in Connecticut for eight years with his last stint being the co-anchor of the evening news on NBC 30; Rebecca Stewart is a 5-year veteran at Fox 61 where she was weekend anchor and a weekday reporter for their News at Ten; Joe Furey is probably more familiar by voice as he is the Chief Meteorologist for WTIC News/Talk Radio 1080; and Rachel Lutzker - well, she's Rachel Lutzker and she's brought more people to my blog than any other search out there so what can I say other than thank you? 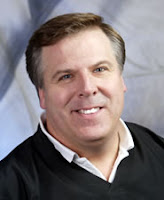 So, for those of you who have been coming to my blog looking for Rachel you can now find her every weekday morning on Fox 61 from 6:00 to 8:00 a.m. reporting the traffic and chatting with the rest of the morning news team. I'm sure that once they all get used to their new digs (part of which is the shiny black news desk that Logan really, really likes) and each other's personality, the show will flow along a bit more smoothly but somehow I don't think that matters to a lot of you - you just wanted Rachel back and she is!
Posted by Linda at 3/04/2008