Something to Get Excited About

Even though I only live about an hour away from the beaches in Rhode Island (the next state over to the right if you're facing Maine!), I've only actually been to one of them once. If you've got some time to kill and want to read the post, I blogged about it way back on July 26th, 2006. The girls and I had a great time with our friend Paula even though I ended up getting a nasty sunburn on my feet which turned into a nasty case of cellulitis (a common, potentially serious bacterial skin infection) that put me out of work and on crutches for a few days. Despite the end results we had a wonderful time and I've often wondered why it is I don't get to the beaches in Rhode Island more often. 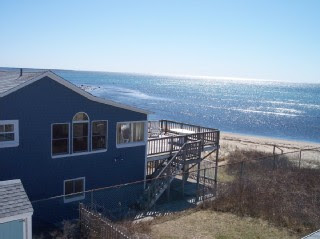 After some initial planning and then more planning and much discussion via emails and IMs, it now appears that I'm going to get the chance to not only visit another beach in Rhode Island this year but also spend a week at a house right on the beach in Matunuck. That's the place in the picture above - doesn't it look nice? It has four bedrooms, two bathrooms, a beautiful deck overlooking the ocean, and all the comforts of home minus sheets and pillowcases and a few other things that are easily brought along. It has room for eight people and comes complete with eight lawn chairs for sitting out on that lovely deck and sipping a cocktail or two while someone else grills up some steaks on the barbecue grill that's provided.

Sounds just perfect, doesn't it? Yes! Yes it does and what makes it even more perfect is that I'm going to be spending the week after my 50th birthday right there on the beach with some of the best friends a gal can make via the Internet - Morgen @ It's a Blog Eat Blog World, Callie Ann @ Scrappin' With Life, Kai @ The Buzz Queen, Mags @ Ms. Maggie Moo Talks 2 U, and my very favorite cheeky blogger from across the pond - Claire @ A Little Piece of Me. I have to tell you that I am totally psyched for this vacation and can't wait until September even though that seems like I'm rushing headlong even faster to hitting that half century mark that so many of us dread. 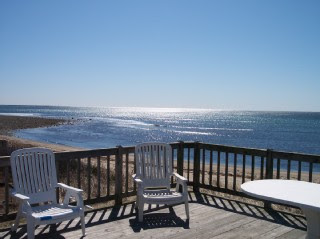 Okay, so I bet you're wondering right now how on earth it is that someone from Connecticut has managed to hook up with a Canadian, a Brit, an Oregonian, and a Michiganite along with a former fellow Nutmegger to plan a week on the beach in Rhode Island of all places, aren't you? Well, we've decided to blame this one squarely on Mo and The Mo Show as that's how we all seemed to hook up. During after-show IM sessions, we were all bemoaning the fact that we needed a vacation, that we'd all like to meet, and that it would be cool to do something BIG for my 50th birthday and somehow we ended up planning a week at one of the most relaxing places we could think of. You've got to admit, that deck does look relaxing, doesn't it?

As most of you know, Mags and Mo and I all got together last September when Mo took the train down from Michigan to spend a weekend exploring bits of Connecticut and Rhode Island and we had a GREAT time! The three of us know what to expect from each other but as for the other three - Callie Ann, Claire, and Kai - we only know each other via the pages of our blogs and IMs and emails but getting to know each other is going to be half the fun of this trip. Mags has promised to create some fantastic meals for us, Claire wants to go exploring the countryside, Callie Ann has a marvelous sense of humor, Kai can bring some moose steaks and tales of the Canadian wilds, Morgen is just one of the nicest guys ever, and me - well, I'm not sure what I offer to the mix but I'll try to think of something by September! 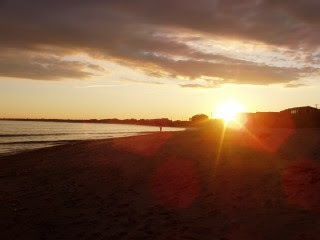 With sunsets like this one, how can this not be a fantastic trip and week well spent away from the stress and pressure of 911 calls and medical emergencies? What better way to spend the week after my 50th birthday? I can't think of one and I'm sure that we'll all have tales to tell - though now that I think about it, I don't believe the house has an internet connection. Oops!