Joking Around With "The Dark Knight" 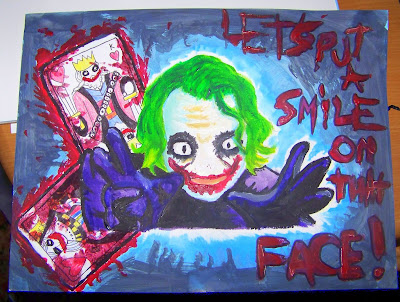 A Joker painting by Amanda
As I mentioned in Saturday's post, going to see "The Dark Knight" this weekend as part of Jamie's birthday activities was on the agenda and, even though I wasn't exactly chomping at the bit to see it myself like the girls were, they talked me into going with them. The thought had really occurred to me to drop them off and pick them up later for several reasons - the first of which was Hollywood itself.

Unfortunately Hollywood has been beating to death all of the hype about Heath Ledger's final performance as the very disturbing villain The Joker and even though I've always been a Heath Ledger fan, I was half-tempted not to go see the film simply because it seemed like they were using his tragic death to promote it. Would everyone have been raving over his performance if he hadn't died shortly after the movie was made or was this a great way to sell a film that might be so-so? Those were the things that gave me pause - that and the fact that the movie is over 2-1/2 hours long and I wasn't sure how sitting in a movie theater for that amount of time was going to affect my ever fickle lower back.

As it turned out, I'm glad I acquiesced and went to the movie after all as it really was much better than I thought it was going to be. In addition to Heath Ledger's amazing portrayal of The Joker (parts of which reminded me of Jack Nicholson's performance of the same character in the 1989 version of Batman), there were fabulous performances by Michael Caine, Gary Oldham, and Morgan Freeman - excellent actors all. I also have to admit that Christian Bale makes for one very hot Bruce Wayne! Oh - and he does a good job as Batman, too, though I find his voice to be rather disturbing. 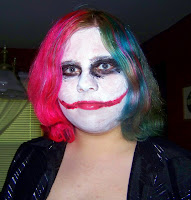 Both Amanda and Jamie really liked the movie and Amanda is ready to go back again, though hopefully not wearing full Joker make-up like she decided to try putting on the other day! Maybe I should be a bit nervous that my oldest daughter has no trouble in looking like a Super-Villain but I'm going to hope that this was a one-time deal strictly for MySpace pictures . . . and to terrorize her sister a little bit! 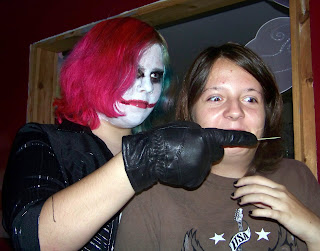 Sigh ... I don't know why those two can never seem to get along!

Amanda, put down that knife and leave your sister alone! Wipe that silly grin off of your face and clean up your room while you're at it! And stop asking me, "Why so serious?"! Kids ...

Anyhow, for what my opinion is worth (and I'm thinking that's not much!), I would definitely recommend "The Dark Knight" be seen as it's DC Comics on the big screen at its very best even though I still can't figure out why the fools who live in Gotham want to think that the Batman is a bad guy! Hello? People? He fights crime ... yeesh!
Posted by Linda at 7/28/2008