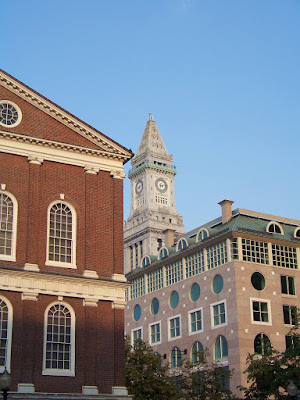 Even though I've been back from Boston since Sunday night, I'm still a bit worn out from the terrific weekend that Jamie and I had visiting Ms. Maggie Moo and the wonderful city she now calls home since moving there from her former place of residence in Connecticut. This was my second time going up to Boston since Mags moved up there - I first went in May when it rained on us and this time it was hotter than I would have preferred but Jamie and I still really enjoyed our weekend. 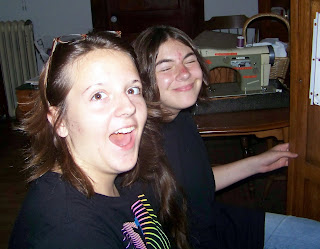 We started our journey on Friday by heading north to Shirley, Massachusetts where my cousin lives. My cousin's husband is my former brother-in-law which makes their two daughters Jamie's cousins so it also gave her a chance to see them. As a matter of fact, she stayed there on Sunday to visit for a few days while I came back to Connecticut to return to work. Amanda and I will be going up later in the week to pick Jamie back up and give Amanda a chance to visit her cousins for a bit.

Anyhow, I digress ... in Shirley we caught the commuter train into Boston which brought us into North Station and a hop, skip, and a jump to the "T" to then head out to Mags' apartment. We arrived there just a little before 6:00 with just enough time to hop back on the "T" and head up to Tasca, the tapas restaurant that Mags and I went to on my first visit to see her. I had really enjoyed it then plus they had graciously sent me a $14 coupon as they were celebrating their 14th anniversary in July. Who knew I would actually have the chance to use it?!? Woohoo! Mags and I ordered a small pitcher of Sangria and thought it rather odd that the waitress asked Jamie if she would be having some, too. Uh ... hello? Does she really look that old? Jamie ordered a ginger ale instead, more in keeping with her age of 14! 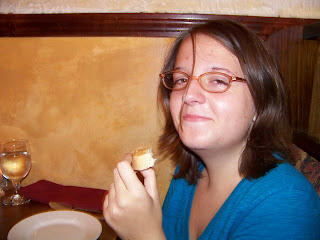 We ordered several different dishes to try and even though Jamie took a taste of everything her very favorite was the Albóndigas, which are tenderloin meatballs in a green peppercorn sauce. Surprisingly, she seemed to like the sauce the best. Her other choice of Gambas al ajillo, sizzling shrimp in garlic, turned out to be not as good as she thought so she graciously gave the rest to Mags. After dinner we walked back down the hill to Mags' apartment where we watched a little TV along with a fantastic lightning show out the windows before calling it a night. 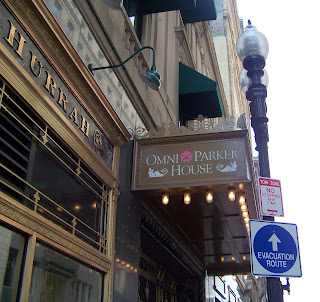 Saturday morning had us up and heading off on the "T" into Boston for breakfast at the Omni Parker House Hotel, which is the oldest continuous running luxury hotel in the country having opened in 1855. Parker's Restaurant is the birthplace to Parker House Rolls and Boston Cream Pie and ever since learning that fact while overhearing a tour guide on my last trip to Boston, I've wanted to go check it out. The dining room was elegance at its best with a very courteous waitstaff and beautiful surroundings. When he learned that it was our first time there, our waiter was kind enough to bring us an entire plate of just-out-of-the-oven rolls with our own individual dishes of butter, Even if that was all there had been for breakfast, I would have been a very happy woman! They were absolutely delicious and the best I've ever had - bar none!

In addition to their breakfast dishes, Jamie and Mags had both ordered Boston Cream Pie (yes, it's on the breakfast menu!) but I figured I would just sample some of Jamie's which she didn't mind and it turned out to be fantastic. They prepare it unlike any other Boston Cream Pie I've ever seen before but I figure if they invented it to begin with, they can dress it up any way they want! All in all, it was a very nice breakfast and I really enjoyed the ambiance of the dining room - as well as my breakfast company! My next goal for the Omni Parker House is to actually be able to spend the night there as rumor has it the third floor is haunted and that totally intrigues me! 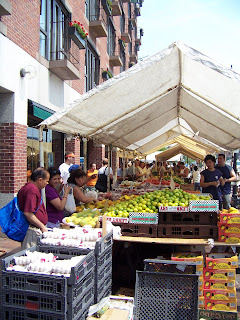 After breakfast we made a quick stop at Haymarket so that Mags could pick up some fruit and vegetables. The prices there just astound me and Mags walked away with a bag full of goodies - including strawberries, blueberries, and raspberries - for $7! I tell you, Haymarket alone is enough to make a girl want to move to Boston - never mind all the other great stuff there!

From there it was back to Mags' where we hopped into her car and headed out to Revere Beach and the annual Sand Sculpting Competition that they have there. After driving around lost through the streets of East Boston for awhile, we were finally able to find the place and miraculously a parking spot opened up right before us. At that point it was getting hotter than a June bride on a featherbed (I love that saying!) and being by the shore didn't make one bit of difference as there was no breeze helping to cool things off. 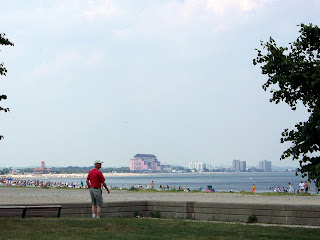 As we walked down to the area of the beach where the sand sculptures were, I was beginning to understand why the place is referred to as Freakin' Revere (or worse!). The traffic was terrible, there were people all over the place, and a good majority of those people had absolutely no business being out in public wearing what they had on. No offense to Boston but holy cats, there were some truly ugly people on that beach - or at least close to the beach because most of them were parked in lounge chairs and the like on the sidewalk which was nowhere near the water! I just didn't get it ...

We checked out the sand sculptures, which were all pretty cool, and then decided to forget trying to find Kelly's Famous Roast Beef where we had hoped to have lunch and try to find our way out of there instead. Leaving turned out to be much easier than getting there was - thank goodness! - and we eventually ended up at Panera Bread in Brookline for lunch. It was no Kelly's but it was good and gave us time to go back to Mags' to rest up a bit before catching the "T" back into Boston for our Evening Harbor Cruise that we had booked. Mags has this fantastic couch and I had no trouble drifting off for a nice little nap while Jamie spent a little time watching TV. 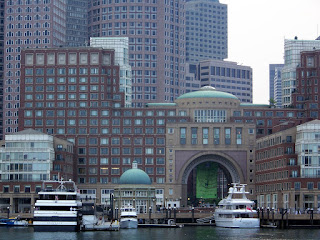 Our 90-minute cruise around Boston Harbor gave us some wonderful views of the city as it took us out past some of the islands in Boston Harbor including Georges Island where Fort Warren was built in 1847. The fort served as a prison for Confederate soldiers and is reported to be haunted by a Confederate prisoner's wife who is said to have been sentenced to death for aiding in an escape and hanged in a black robe made from the fort's mess hall drapes. Yet another place I need to check out more up close and personal!

Continuing our cruise, we went past the U.S.S. Constitution, aka "Old Ironsides", where we got to witness the firing of the guns - which turned out to be one gun! - at sunset. It went off a little earlier than expected and surprised most of the people on board but it was still pretty neat. Seeing Boston from the harbor was wonderful and a great way to spend Saturday evening as it was a little cooler out on the water than it was in the city itself. 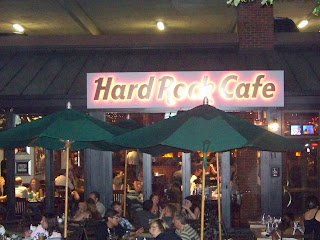 We rounded out the night with dinner at the Boston Hard Rock Cafe which Jamie was definitely into. When an AC/DC song came on the video monitors around the room she couldn't have been happier as that's "her" band. It was at the Hard Rock that yet again Jamie was asked if she wanted a beer or glass of wine so I don't know if she looks a lot older than she is or if people in Boston are just used to college students and assumed her to be one. I guess if you're underage and want to drink, perhaps Boston is the place to go? Good grief!

When we finally got back to Mags' apartment, it was after 11:00 and even though I would have liked nothing more than to collapse on that comfortable couch and call it a night, Jamie wanted to watch a scary movie so we ended up watching Stephen King's "Sleepwalkers". It really wasn't all that scary as for some reason most Stephen King stories don't seem to translate well to film but Jamie enjoyed it and we didn't turn off the TV until after 1:00 a.m. What a long day! 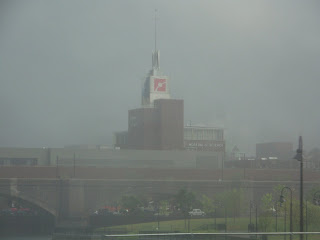 Suffice it to say it was after 10:00 when we finally managed to wake up on Sunday morning! You would think that sleeping on a couch would cause a person to wake up early but not if that couch is the one in Mags' apartment! That thing is wicked comfortable and I want one of my own!

Around mid-afternoon Jamie and I thanked Mags for a wonderful weekend, bid her good-bye, and climbed on board the "T" for one final trip into Boston and back to North Station to catch our commuter train back to Shirley. While waiting for the train, Boston was hit with one heck of a thunderstorm that rattled the walls of the building around us while dumping gallons of water on the waiting trains. Good thing we didn't have to wait outside in that weather!

The train ride back to Shirley was uneventful though a little warm as the storm had knocked something out in the train that left us without lights and/or air-conditioning. By the time we got to Shirley, it was starting to get a bit warm and stuffy so I was glad we were at the end of the line for our adventure.

After leaving Jamie happily ensconced with her cousins in Shirley, I made the hour and a half drive home to Connecticut exhausted but happy. I think that Jamie had a really good time visiting both Boston and Mags and she can't wait to go back so we can go on the "Ghost and Graveyards" night tour that she saw offered. Perhaps that's something to think about for next summer when maybe by then I'll finally be rested up!

A big thank you and a cyber-hug to Mags for a truly fantastic weekend - it really was wicked awesome and you freakin' rock! Can't wait to see you in September!