With the death of three more officers in the final days of June, the number of names added to the Honor Roll on my sidebar for this month alone climbed to 13 - second only to the 14 line of duty deaths in January. With each life that I recognize and honor by writing these posts, my heart grows heavier as I grieve with the family, friends, and co-workers of these brave men and women but I was reminded why exactly I do this when I received the following comment on a previous Line of Duty Death post just the other day -

I don't think that there is a day that goes by that I don't think of Matthew Thebeau. Although I never knew him personally, I, along with 3 other friends was there, in the only vehicle at the time about 10 ft away from his patrol car when he crashed into the concrete wall. Officer Thebeau was indeed chasing a motorcyclist and was indeed killed in the line of duty. I pray for him and his family. It was quite a traumatic experience. Thank you for this blog.

One of the nine witnesses questioned,

Thank you, Melissa, for remembering Officer Thebeau and as to my blog and these posts, you're welcome - I just wish I didn't have so many of them to write. Still, as long as those who have sworn to protect and serve the rest of us meet an untimely death, I will continue to remember them and remind others of their final sacrifices. Now, sadly, I have three more heroes to honor ... 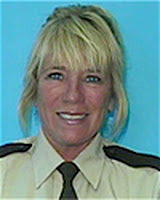 A hiding inmate used a makeshift knife known as a shiv to fatally stab a veteran female corrections officer who was trying to take him into custody inside a Florida prison facility on Wednesday, June 25th. Correctional Officer Donna Fitzgerald was stabbed to death at the Tomoka Correctional Institution in Volusia County after she had entered a welding shed, spotted a missing inmate, and tried to take him into custody.

Officer Fitzgerald, who served for 13 years with the Florida Department of Corrections, became the first corrections officer murdered at Tomoka Correctional as well as the second female corrections officer to die in the line of duty in Florida. Department of Corrections Secretary Walter McNeil explained the dangers officers face daily - "The general public does not always understand the dangers our officers face behind these fences," McNeil said. "As correction professionals, we know that each and every day the possibility of death and injury is an ever-present aspect of the job. Yet, when it happens -- like we all are across our department today -- it is shocking and heart-wrenching. We are dismayed."

Officer Fitzgerald, age 51, is survived her 20-year-old son, Kyle Antonelli, who was understandably inconsolable. Kyle's father died from cancer two months ago and he is now mourning the loss of his mother who said was "the best person in my life. She would do anything for me. We did everything together."

The Florida Department of Law Enforcement is investigating the attack. At this time, no charges have been filed pending an administrative review which should conclude within a few weeks. 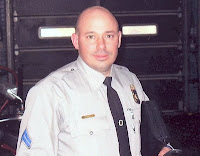 A Prince George's County Police Department officer was killed in the line of duty on Friday, June 27th, when he was was struck and killed by a stolen automobile while attempting to arrest its occupants. Corporal Richard Findley, a 10-year veteran of the department, and other officers were conducting surveillance on a stolen vehicle when it was entered by two occupants who then attempted to drive it away. During an attempted traffic stop, the suspects rammed Corporal Findley's cruiser then struck and killed the officer when he got out of his vehicle.

In addition to his duties with the police department, Corporal Findley was a life member of the Beltsville Volunteer Fire Department where he had served for approximately 20 years.

Corporal Findley, age 39, is survived by his wife Kelly, also a member of the Beltsville VFD, and two young daughters.

On Sunday, June 29th, Police Officer Gary Gryder of the Houston Police Department was killed when an Asian male in his early 20s, crashed through construction barricades and plowed into three officers who were working traffic control at a West Houston construction site on the Katy Freeway eastbound feeder and Highway 6 around 5:15 a.m. One officer managed to jump out of the way, a second was hospitalized, and Officer Gryder - who was thrown 75 feet upon impact - died as a result of his injuries.

A 23-year veteran of the Houston Police Department, Officer Gryder worked a variety of beats during his career. Fifteen years ago, he was one of the lead investigators to crack the case of two teenage girls who were raped, tortured, and killed by five young gang members. His most recent assignment was to track down parole violators from the department's southeast precinct. Officer Gryder was working HPD-approved overtime when he was killed.

''To lose a great guy like Gary Gryder over something as stupid as an impaired driver, that's the tragedy," said friend Gary Blankinship, president of the Houston Police Officers Union. In a statement issued Monday, Houston Police Chief Harold Hurt said, "We have lost a good officer and an important part of the HPD family. We will miss him. Our heartfelt thoughts and prayers go out to Gary's family during this very difficult time of loss," Hurtt said.

Officer Gryder, age 47, is survived by his wife and 13-year old son Austin.

My thoughts and prayers go to the families of these three brave souls who have more than earned peace and eternal rest.