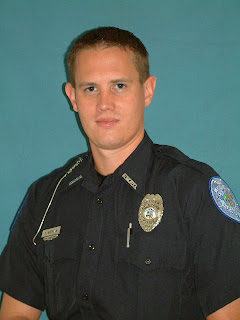 Another senseless shooting has left one police officer dead and a family and department stunned and saddened over his loss while a community rallies around to help.

Police Officer Andrew Widman of the Fort Meyers Police Department was shot and killed on Friday, July 18th, at approximately 2:00 a.m. after responding with other officers to a report of a domestic disturbance at a downtown nightclub. Upon their arrival, the suspect and his girlfriend were involved in a violent dispute. When Officer Widman attempted to intervene he was shot point blank by the male half with a 9mm gun. Officer Widman never had a chance to pull his own weapon and died instantly. The suspect fled the scene and was pursued by other officers whom he engaged in gunfire before being shot and killed.

Officer Widman, age 30, joined the Fort Meyers Police Department in April of 2007 and was well-liked by his fellow officers on the midnight shift. "He became a part of the family very quick, very easy," said Lt. Dennis Eads, Widman's supervisor. Eads also described Officer Widman as "devoted, not only to the force, but to his family."

Before he became a police officer, Andrew Widman attended the Gordon-Conwell Theological Seminary in Massachusetts where he received a Masters of Divinity degree. He was a licensed minister in Ohio where he worked as a college pastor and also taught at a seminary in Michigan before he pursued a career as a police officer.

In a statement released by the Florida State Attorney General's Office, Attorney General Bill McClollum had this to say: "This is a difficult time for Florida's law enforcement community, as Officer Widman's death comes just weeks after the line-of-duty slaying of Tomoka Corrections Officer Donna Fitzgerald. Like Officer Fitzgerald, Officer Widman will always be remembered for his dedication to the safety of his community. I offer my prayers and support to the victims' families, friends and colleagues during this challenging time."

Officer Widman leaves behind his wife Susanna, three children, ages 4-years, 20-months and 5-months, and his parents Joseph and Martha Widman of Toledo, Ohio, his sisters Abby and Alyse and his brother Tony.
Posted by Linda at 7/22/2008