I've been going to the same doctor for years and years now but when I first started going to Dr. Joe way back in the mid 1990's, I lived a lot closer to his office. When I moved to Norwich I moved a lot further away from his office which is located in Brooklyn which is about 30 miles north of where I currently live. Still, I really like Dr. Joe and didn't see the need to change to a doctor closer to home until recently when gas prices went through the proverbial roof.

I didn't like Dr. Joe simply because he looked a lot like the actor Jon Lovitz and I continuously expected him to break out into a routine from Saturday Night Live but because he never talked down to me and didn't dismiss any of my concerns. I've been with the man for many years and many problems but now the high cost of gas has made me look for a doctor closer to home here in Norwich. Sigh ...

To that end, I had an appointment with a new doctor today who seemed more than qualified as she had held several doctor's jobs in San Francisco and had recently started her own practice here in Norwich. Though she seems nice enough, I'm not sure if I'm going to stick with her or haul myself the 30 miles to see "my" doctor as there just seemed to be something missing during the course of the appointment. Maybe my expectations were just too high or something. Well, that and I just couldn't picture her saying, "yeah, that's the ticket!"

At any rate, during the course of my physical I told her about my ongoing back issues and how I'm almost afraid to do anything these days for fear that I'm going to throw my back out again. After all, last time I was in pain for three days simply because I bent down to put yogurt containers in the refrigerator; something like that most definitely gives one pause and makes one overly cautious. Being able to tell the weather by how bad my leg aches is getting kind of old, too! 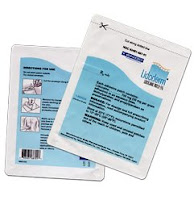 The new doc asked if I had ever tried lidocaine patches and I told her that I had heard of them but never tried them. She told me that some people have great success with them while they do absolutely nothing for other people but if I have chronic pain (which I do!) then perhaps they might be worth a shot. If you've never heard of a lidocaine patch, it's a form of topical anesthesia that you apply directly to your skin to stop the nerves from transmitting painful impulses to the brain. Considering that a lot of my current pain is due to residual nerve damage from when I had that pinched and mangled sciatic nerve, I figured that it wouldn't hurt to give the patches a try. With a glimmer of hope starting to spark, I went to the local CVS Pharmacy and ran smack into a brick wall ...

As the pharmacist typed the information into the computer for my insurance she stopped, looked up at me, and asked me if that was the only insurance I had - perhaps I had a secondary insurance that was better? Uhm, no ... I only have the one insurance but I could have sworn that I was told that our prescriptions were of the $5/$10/$2o deductible sort ... was it more than $20? Yep ... a lot more ... $166 more! Had I decided that I really wanted this prescription filled my co-pay for 30 days worth of the patches would be $186 ... that's just $14 shy of $200 if I'm doing my math correctly! Nothin' for nothin' but I'm a single working Mom and I just don't have that kind of money sitting around collecting dust. Plus to have to come up with it every 30 days ... nope, not happening!

Sigh ... so even though there seemed to be the possibility of a little bit of light at the end of the tunnel where my back pain was concerned it turns out that it was simply the headlight from yet another oncoming train set to flatten me if I didn't jump off of the tracks in time. I swear ... I need to either qualify for Medicare, Medicaid, marry a guy with a great insurance plan, or move to Canada because my health insurance is depressing the hell out of me!

The really sad thing is, I doubt I can afford the co-pay to go to a psychiatrist to talk about my depression!
Posted by Linda at 7/15/2008

Email ThisBlogThis!Share to TwitterShare to FacebookShare to Pinterest
Labels: health