A Tale of Great Customer Service 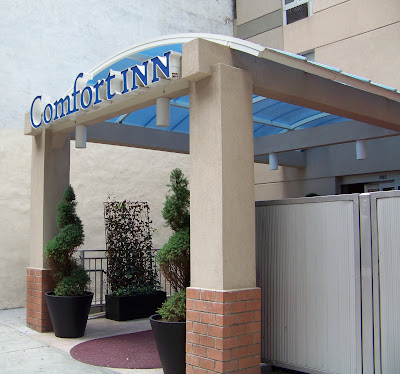 The Comfort Inn Times Square in New York City
Life has been pretty busy since we got back from our trip to New York City so I'm still working on the "official" post of our trip there. This is what happens when you take way too many pictures and then have to try to organize them in between paying attention to real life and getting a back ache and ... blah, blah, blah! Anyhow, I haven't forgotten and will hopefully have that post up before the end of the week but in the meantime I wanted to tell you about one of the best parts of our trip.

Remember awhile back when I wrote a post about the rude service that I received at Gus' Pizzarama in Plainfield? My lament in that post wasn't that there were no free refills of drinks but that the customer service - by the owner of all people - was so absolutely horrible. It has always been my personal opinion that customer service speaks volumes and it's what can make or break a business. I don't expect people to not go to Gus' because of my experience but I certainly won't go back again - which is too bad because they made the best broasted mushrooms ever.

Which in a round-about sort of way finally brings me to the point of this post! New York City has a reputation for being filled with rude people who either ignore you completely or yell "fuggedaboutit!" all the time so one kind of expects that customer service in New York might be somewhat lacking. However I met one of the nicest people ever working behind the front desk of The Comfort Inn Times Square where we stayed on our trip.

Check-in time at our hotel was 3:00 p.m. but we arrived in the city a lot earlier than that and parked in the garage across from our hotel on 39th Street. It was the type of parking where you leave your car and won't see it again until you leave the next day so we had to make sure we took all of our bags out with us. Not wanting to lug them around until check-in time we stopped in at our hotel to leave them in a holding area (I had called ahead and made sure they offered this service, most New York hotels do). At the time we got there, the place was quite busy and Willie, the gentleman on the desk, was up to his eyeballs in phone calls, customers, and walkie-talkie transmissions from other employees. To say the guy was busier than a one-armed paperhanger would be an understatement!

Regardless, though, Willie was friendly and helpful and fantastic. It was only about 12:30 and way too early to expect to check-in so I explained that I simply wanted to leave our bags and we would be back later to officially check-in. Willie was great and got our bags tagged, offered us bottles of water and a map to the city, and pointed us in the direction of the closest restroom. Just as we were about to leave, he stopped us and told us that a room had just become available and we could check-in right then if we'd like. Absolutely! In the meantime, the phone is still ringing, people are still asking him questions, the UPS guy has just arrived with a large delivery, and yet Willie is cracking jokes and making us feel like we're the only ones in the lobby. I was impressed, I really was. 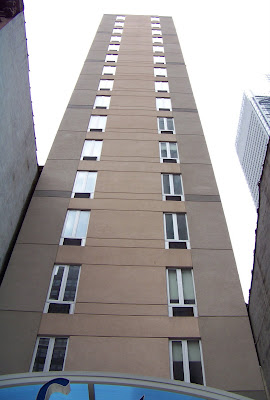 After we got checked in and dumped all of our stuff in our room on the 17th floor (the hotel is 20 stories high with only four rooms on each floor so by New York standards its tiny but it was conveniently located and the price was great with my AARP discount) we went back down to the lobby where Willie gave us a big smile and a wave while he joked about Amy and I taking over for him on the desk. He said that if I was a 911 operator and she was an EMT we were more than qualified to take over as desk clerk but I doubt that either of us could have done the marvelous job that he did! The other employees at the hotel were nice but they didn't hold a candle to Willie.

As Willie was one of the first people that we dealt with on our trip (I don't count the grumpy garage attendant!), his friendliness really helped set the tone for the rest of our trip. There is nothing like being warmly welcomed to a place to make you feel good and enjoy your vacation and Willie did that and more. Because of that, when we got home, I sat down and wrote the following email to the manager of The Comfort Inn Times Square:

I wanted to take a moment to tell you how very much I appreciated the personal attention and service that I received during a recent stay at your hotel. The clerk at the desk during check-in, Willie, was absolutely wonderful and one of the friendliest - if not the friendliest - persons that I met during my stay in New York City.

Due to arriving in the city early for the day on Friday, June 27th, we had parked our car at the garage across the street from the hotel and wanted to be able to drop our luggage off so as not to have to cart it around with us. I had called ahead and been told that the hotel offered that service so my friend and I took our luggage to the lobby where Willie, even though swamped in between checking out other guests and the constantly ringing phone, was very friendly and helpful. Just as we were about to exit the lobby, he advised us that a room was ready for us to check in to even though it was barely 1:00 rather than the usual 3:00 p.m. check-in. Rather than just leave our luggage in holding we were able to take it directly to our room before leaving for the day.

During the entire check-in process Willie was professional and helpful and funny - he made us smile a lot and in my book that counts big time! In addition to his help during check-in, Willie also was very helpful in giving us directions to other places in the city and suggestions as to where to go and what to see. We didn't pass through the lobby once without a friendly greeting from him while he was on duty.

I have stayed in New York quite a few times and I have got to say that this was the best experience I have had there yet - mostly due to Willie. I wish that I could say that the rest of the staff was as friendly and dynamic as he was but, even though they were nice, none of them compared to this fine employee of yours.

I hope that you will pass on our appreciation to him for a job well done and should I ever find myself needing a place to stay in New York again and choose the Comfort Inn Times Square, I sure hope that Willie is on duty!

I thought it was the least I could do and I was quite pleased to receive back the following email in return:

Thank you for the wonderful letter you wrote regarding Willie and your stay here at Comfort Inn Times Square. Willie is very special to us, as he strives to provide outstanding service to all our guests. He is a great example of what customer service should be all the time. I will certainly share your comments to Willie and the rest of the staff. Thank you for choosing Comfort Inn Times Square as your hotel while you were in New York. We hope to see you again in the near future.

Have a great 4th of July holiday!

It's the small things like this that would definitely make me go back to someplace like The Comfort Inn Times Square and to recommend it to other people should they be looking for a place to stay in New York City. Also, I'm very pleased to know that the manager of the hotel knows exactly what a great employee he has with Willie. Too often people are quick to complain but then fail to let people know when they've done a great job and I wanted Willie to know that he was tops as far as I was concerned. I mean, hey - if I can complain about lousy service (like with Gus'), I can certainly do the opposite with great service!
Posted by Linda at 7/09/2008